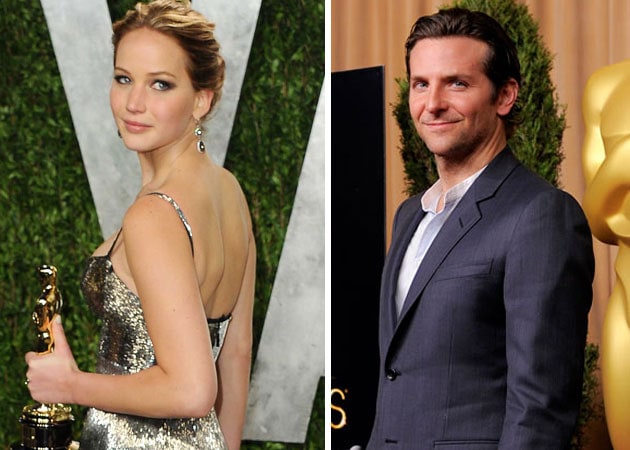 Hollywood stars Bradley Cooper and Jennifer Lawrence were big winners at the MTV Movie Awards after picking up award for best male and female performance for Silver Linings Playbook.

Hollywood stars Bradley Cooper and Jennifer Lawrence were big winners at the MTV Movie Awards after picking up award for best male and female performance for Silver Linings Playbook.
The duo also shared a gong for best kiss for the same movie. Accepting the second award, Cooper said, "Jennifer's not here but she was great to kiss."
Adam Sandler and Chris Rock took to the stage to present Jamie Foxx and Samuel L Jackson with the iconic golden popcorn statuettes for best moment for Django Unchained.
Star Trek's Zoe Saldana, Zachary Quinto and Chris Pine too to the stage to honour Marvel's Avengers Assemble as winner of best fight.
Director Joss Whedon later took home the Movie of the Year for Avengers Assemble. Tom Hiddleston also picked up the best villain award for his role as Loki in Thor and paid tribute to One Direction singer Liam Payne's dog, who shares his name with the evil Marvel comic character.
"I would like to thank Liam Payne from One Direction, who I believe has named his dog Loki. Liam's dog is certainly better looking, better bred and most certainly more well known with more Twitter followers than me and even though they don't know who Liam's dog is in Asgard, it's all about getting the word out," he said.
Host Rebel Wilson won the breakthrough performance award for her role in Pitch Perfect and shared the gong for Best musical performance with her Pitch Perfect cast mates. Zac Efron, Danny McBride and Seth Rogen presented the Twilight actor Taylor Lautner with the best shirtless performance award.
Kerry Washington gave a glowing speech about her frequent co-star Jamie Foxx before he took to the stage to accept the MTV generation award, his second gong of the night. Macklemore and Ryan Lewis and Selena Gomez were among the performers at the ceremony.