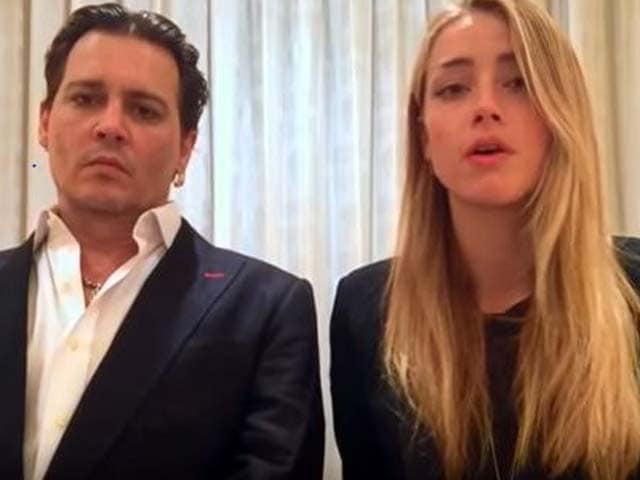 Johnny Depp and Amber Heard in a still from the video. Image courtesy: YouTube

Johnny Depp and his wife Amber Heard released a video apology on Monday for flouting quarantine laws by bringing two dogs into Australia aboard their private jet, in an awkward finale to a case dubbed the "war on terrier". (Also Read: Johnny Depp's Wife Amber Heard Pleads Guilty in Dog Fiasco)
The case made headlines last May after Agriculture Minister Barnaby Joyce threatened to have the pets, Pistol and Boo, put down unless they "buggered off back to the United States".
The apology was played in court as Amber Heard escaped conviction after pleading guilty to falsifying immigration forms when she brought the dogs into Australia, where Johnny Depp was filming Pirates of the Caribbean: Dead Men Tell No Tales.
In the video, which resembled a public service announcement, the Hollywood couple stressed the importance of obeying the nation's strict biosecurity laws, with a deadpan Johnny Depp adding that Aussies were 'just as unique' as their wildlife.
"Australia is a wonderful island with a treasure trove of unique plants, animals and people," said Amber.
"It has to be protected," Johnny Depp said in a grave tone.
"Australia is free of many pests and diseases that are commonplace around the world. That is why Australia has to have such strong biosecurity laws," Amber Heard said.
"And Australians are just as unique, both warm and direct. When you disrespect Australian law they will tell you firmly," Johnny Depp added in an apparent reference to the minister's threat.
Amber Heard expressed her 'remorse' over the case, in one of many awkward moments which raised giggles on social media, where the video was compared with a hostage plea or North Korean-style propaganda.
"I am truly sorry that Pistol and Boo were not declared," she said.
Two more serious charges against Amber of illegally importing the Yorkshire terriers were dropped on Monday by the court on the Gold Coast in Queensland state.
But she admitted a third charge of providing a false document by failing to declare the animals on her arrival card. She was placed on a Aus$1,000 (US$760) one-month good behaviour bond.
The 29-year-old blamed Johnny Depp's staff for the mix-up, saying they were supposed to take care of all the paperwork. "It was a terrible, terrible mistake," defence lawyer Jeremy Kirk said. "There was no attempt to deceive," he added.
'Hostage video'
Joyce, who is also deputy prime minister, told reporters the couple had communicated with the Department of Agriculture about filming the apology.
"I don't think it'd be something that they would've willingly would've wanted to do," he said.
The video quickly went viral on social media.
Lewis J Abbey tweeted:


Can we talk about how Johnny Depp and Amber Heard look like they're being held hostage by the Australian government? https://t.co/T2FTVysqsm

A black limousine had dropped the couple at the Southport Magistrates' Court where minders escorted them through a media scrum as supporters shouted "Go Johnny" and "We love you".
The dogs' presence in Australia only came to light when they were photographed at a grooming salon more than three weeks after they arrived. They were quickly whisked out of the country as the story hit the headlines.
Johnny Depp had made fun of the incident, saying the dogs had been killed and eaten 'under direct orders from some kind of sweaty, big-gutted man from Australia'.
Under strict biosecurity laws, dogs entering Australia from the United States must be declared and spend 10 days in quarantine. Penalties range up to 10 years in prison.
Agriculture authorities issued a statement: "Amber Heard made a false declaration on her Incoming Passenger Card, saying she was not travelling with any live animals when she did, in fact, have two dogs in her luggage."
"The consequences of a disease outbreak could have been terrifying. We can't take the risk," Joyce said.
Watch