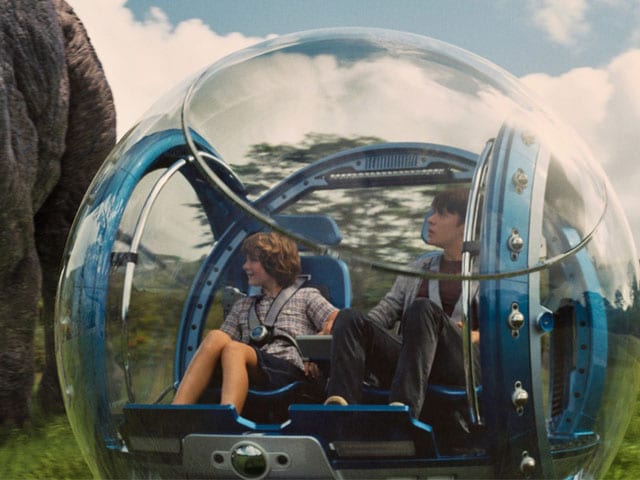 A still from the film Jurassic World

Jurassic World scored the year's biggest bow, just ahead of Avengers: Age of Ultron and its formidable $191.3 million opening last May. It ranks behind 2012's Marvel's The Avengers and its $207.4 million debut on the all-time list of openings

Dinosaurs rule the earth again after Jurassic World debuted to a dominant $204.6 million at the domestic box office this weekend.
That commanding number, the second biggest opening in history, all ensure that 'those pesky geneticists will keep futzing around' with Triceratops DNA for several more installments and park-goers will continue to serve as prehistoric reptile kibble.
Universal Pictures and Legendary shelled out $150 million to reopen the park, bringing on Sundance sensation Colin Trevorrow (Safety Not Guaranteed) and snagging Chris Pratt to star in the sequel. It has been more than a decade since Jurassic Park III and the absence appears to have spiked interest in the latest film. Credit goes to Trevorrow and crew for recapturing that old Isla Nublar magic.
Going into the weekend, it was clear that Jurassic World was shaping up to be a box office colossus, but no one was even close to predicting the scale of the opening. Most projections were in the $125 million to $135 million range.
Instead, Jurassic World scored the year's biggest bow, just ahead of Avengers: Age of Ultron and its formidable $191.3 million opening last May. It ranks behind 2012's Marvel's The Avengers and its $207.4 million debut on the all-time list of openings. From there, Jurassic World stomped across the record books, scoring the third biggest opening day ever, with $82.8 million and shattering all June high-water marks for opening weekend, biggest opening day and all-time biggest PG-13 launch.
"This is really unprecedented in terms of shattering expectations," said Phil Contrino, vice president and chief analyst at BoxOffice.com. "They rebooted it in just a really smart way. Universal's marketing campaign was exceptional. They just nurtured this thing and the trailers were excellent." It also snapped a cold streak at the stateside box office, driving ticket sales up 48% over the previous year. That's quite an accomplishment given that last year at this time fielded the double whammy of 22 Jump Street and How to Train Your Dragon 2.
Universal has yet to release its global figures, but they are likely to be gargantuan. The sequel bowed across 66 international territories including such major markets as China, the United Kingdom, Russia, Mexico, and Australia. In North America, Jurassic World unspooled on 4,273 theaters, the widest release in Universal history.
It continues what has been a commanding year for Universal. The studio has fielded some of 2015's biggest hits, its murderer's row includes Fifty Shades of Grey, Pitch Perfect 2, and Furious 7, and still has the Despicable Me spin-off Minions and Ted 2 waiting in the wings. That line-up is in marked contrast to five years ago when Universal was mired in a prolonged slump and rolling out costly duds such as Green Zone and The Wolfman.
Jurassic World was a juggernaut when it came to premium formats. The sequel did 48% of its domestic opening weekend gross on 3D screens, and set an Imax record with a stateside debut of $20.6 million.
"This is a bigger than life movie," said Greg Foster, chairman and president of Imax Entertainment. "It really reminds audiences why we go to the movies. It honors the tradition of these films but updates them for today's technology."
Jurassic World sucked up most of the oxygen, leaving a handful of holdover films to forage for crumbs. In second place, Melissa McCarthy's Spy showed some staying power, slipping less than 50% to $16 million in its second weekend. The Fox espionage satire has generated $56.9 million in two weeks.
Warner Bros' San Andreas scored a third place finish, picking up $11 million to drive its domestic total to $119.3 million. Horror film Insidious: Chapter 3 finished in fourth with $7.3 million. The Focus Features has generated $37.4 million in two weeks. Pitch Perfect 2 rounded out the top five with a $6 million weekend, bringing its domestic haul to $170.7 million.
Entourage came in sixth with $4.3 million, pushing Warner Bros.' Hollywood comedy to a buzz-killing $25.9 million after two weeks.
Jurassic World had the weekend largely to itself, with studios opting not to release any major tentpole productions. There was one notable art house debut, however. Fox Searchlight scored with Me and Earl and the Dying Girl, a sort of Fault in Our Stars for cinephiles, that opened to an impressive $210,000 in 15 theaters.
© Thomson Reuters 2015