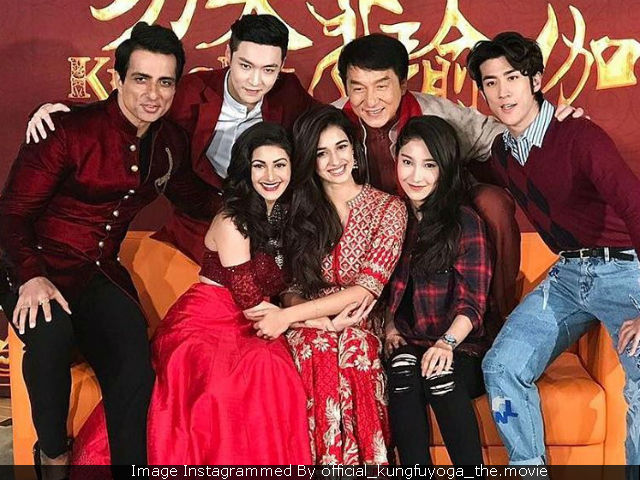 Jackie Chan's Sino-Indian film Kung Fu Yoga will hit the Indian theatres on February 2, Friday. The film also stars Bollywood actors Sonu Sood, Disha Patani and Amyra Dastur. Jackie Chan plays a professor of archaeology while Disha's character is a student of history. Together, they venture on an expedition to discover the Magadha treasure in Tibet. Going by the trailer, it seems Kung Fu Yoga will be an action-cum-comedy and film. The 'yoga' bit in the film's title would be discovered once when we see the film. The film has been directed by Stanley Tong and is extensively been shot in India, Dubai and Beijing.
Watch the trailer of Kung Fu Yoga:

The Hongkong superstar Jackie Chan, 63, promoted the film in India on a large scale last week. He attended press meets and made an appearance at various events. He also took his film to The Kapil Sharma Show along with Sonu Sood. He later met actors Salman Khan and Shilpa Shetty. Jackie Chan also expressed his desire to work in a Bollywood film. He told news agency IANS, "I want to do a Bollywood film, is there any director to hire me? I do not want to do any action-comedy films. I am interested in doing romantic Indian films.
Farah Khan has choreographed Mr Chan in one of the songs. Earlier in April, she told NDTV, "It was fantastic. He is 60-year-old but behaved like a newcomer on the sets.
Kung Fu Yoga is part of the three-film agreement signed between India and China during Chinese President Xi Jinping's visit to India. The film released in China on January 28.