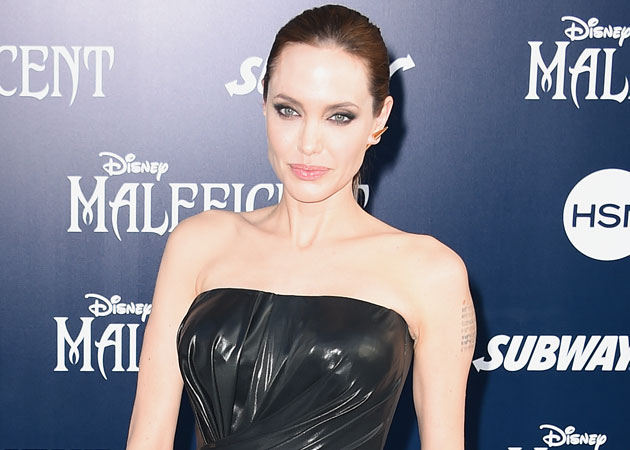 The wicked witch who has haunted generations of children in Sleeping Beauty has been brought grippingly to life by Angelina Jolie, in a modern retelling seeking to humanize the fairytale she-devil.

The wicked witch who has haunted generations of children in Sleeping Beauty has been brought grippingly to life by Angelina Jolie, in a modern retelling seeking to humanize the fairytale she-devil.
Maleficent, which released today, amounts to a towering tribute to Angelina, who produces and stars in the film about the Disney witch with unlimited powers. (Also read: Angelina Jolie Feels Dull After Playing Maleficent )
With a haughty bearing, curved horns and razor-sharp cheekbones, the 38-year-old actress embodies in all its glory the character drawn by legendary animator Marc Davis in the original 1959 classic.
"It was both a great pleasure and an extreme challenge to have such an extraordinary original. And we wanted to make sure we did justice to it," Angelina told at a recent press conference in Paris.
"I was scared of her, but I loved her. I was fascinated by her when I was a child, so I didn't want to do anything that would not be good enough for all the people that had responded to her over the years," she added.
Maleficent aims to be both a retelling of the fairytale - albeit taking several eyebrow -raising artistic liberties - and an exploration of her past, to show what made her so cruel.
"I think it's nice to use these stories that we are familiar with to try to touch on deeper and bigger themes," said Angelina.
"She remains a villain, but there's just maybe more to her. I think it's an interesting message for children, because kids are drawn to dark things. They are drawn to things that scare them." (Also read: At Maleficent Premiere, Brad Pitt Punched by Serial Prankster )
She added, "The goal was not just to entertain children or retell the story. The goal was to try to see these deeper things of really understanding who somebody was, not judging them just by just what they seem to be."
Robert Stromberg, directing for the first time after winning two Oscars in art direction - for Avatar and Alice in Wonderland - agrees it would have been boring to make a film simply about a wicked witch.
"We could have made a movie that was just evil sorceress, but it's very one-dimensional," he told AFP. "What we wanted to do is make the character more human in many ways."
"So to me, the interesting part was to ask questions of why is she so bad, why is she so angry, where does she come from?"
The filmmakers were aware however that the liberties they take with the story could prove distracting. To minimize this, they filled the film with references - aesthetic, historical - linking it directly to the Disney classic.
Thus, for example the scene where Princess Aurora is cursed to eternal sleep when she is christened follows astonishingly closely the equivalent scene from the 1959 animated film.
"We had to have the christening scene, which is the center point of the film. We had to have that work. That iconic moment in the film is when we all recognize that this is the character that we all know and love from the Disney classic," said Robert Stromberg.
"We shot that scene word for word from the animated classic. And it was Angelina's idea."
In the end, more than Maleficent herself, it is the men around her who are shown in a less than favorable light.
The all-too-perfect Prince Phillip (played by Brenton Thwaites) and the cruel King Stefan (played by South African actor Sharlto Copley, from District 9 and Elysium) are lightweights compared to Angelina Jolie's magnificent Maleficent.
"It's interesting because it does make you wonder about what the male role in society is," Sharlto Copley told AFP.
His own character "is a cautionary tale to a certain type of male behavior, dominance and ambition and greed. It's not only restricted to men, but by large a lot of that in the world is male dominated," he added.