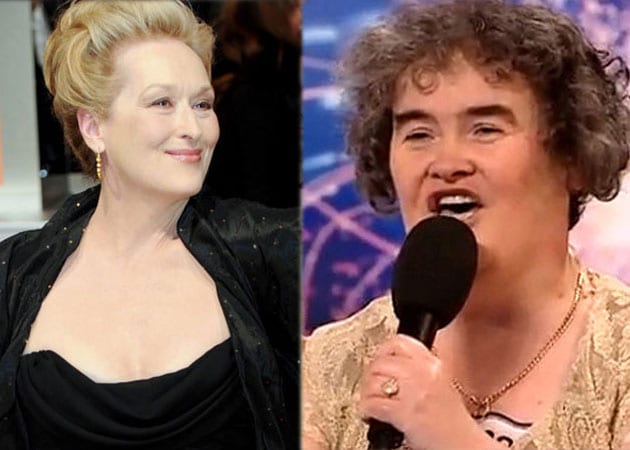 Susan Boyle rose to fame after winning Britain's Got Talent in 2009.

Hollywood star Meryl Streep is reportedly in talks to portray veteran singer Susan Boyle in an upcoming biopic.
The 52-year-old former Britain's Got Talent winner's unexpected rise to fame is heading to the big screen and one of the names on the short list to play Boyle is Streep, 64, reported Independent.
"I wouldn't like to be in the film myself. I'd like someone to play me. Probably Meryl Streep - I understand she has been approached," Boyle said during an interview.
The Iron Lady actress is reportedly not the only woman in line for the part as both Catherine Zeta-Jones and Glenn Close have also been tapped.
Since the opera singer was crowned the winner of Britain's Got Talent in 2009, Boyle has sold more than 19 million albums worldwide, earned two Grammy nominations and been honoured on stage with a musical based on her life.
It is believed that the biopic is being produced by Britain's Got Talent heads Simon Cowell and Fox Searchlight.