Meryl Streep Used To Be An Actress Donald Trump Admired. He Said So In 2015 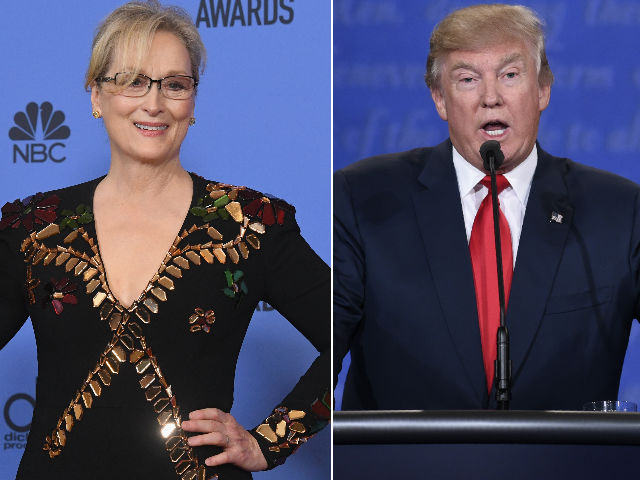 Meryl Streep might be Donald Trump's least favourite person right now but not all that long ago, the President-Elect of USA thought the multiple Oscar and Golden Globe winner was pretty great. Ms Streep was described as 'over-rated' and 'a Hillary flunky' by Mr Trump in angry tweets yesterday, after she delivered a blistering critique of him while accepting the Cecil B DeMille award at the Golden Globes on Sunday. In August 2015, however, The Hollywood Reporter asked which actresses he admired and Donald Trump said, "Julia Roberts is terrific, and many others. Meryl Streep is excellent; she's a fine person, too." He revised his opinion of Ms Streep on Monday:


Meryl Streep, one of the most over-rated actresses in Hollywood, doesn't know me but attacked last night at the Golden Globes. She is a.....

Hillary flunky who lost big. For the 100th time, I never "mocked" a disabled reporter (would never do that) but simply showed him.......

"groveling" when he totally changed a 16 year old story that he had written in order to make me look bad. Just more very dishonest media!

The 'over-ratedness' of Meryl Streep is disproved instantly by the three Oscars, eight Golden Globes and countless other awards she's won. Ms Streep is the most-nominated actor on the Hollywood honour roll. The speech that enraged Donald Trump so was made at the Golden Globe ceremony in Los Angeles on Sunday night and Meryl Streep condemned his "instinct to humiliate," citing an incident from the campaign trail when Mr Trump appeared to mock journalist Serge Kovalski, who suffers from a congenital condition that restricts movement in his arms.
Watch Ms Streep's speech:

Meryl Streep's damning indictment of America's next President was received with thunderous applause that reverberated across social media. From actress Priyanka Chopra, who presented a Golden Globe, came this tweet:


Quoting my favourite #MerylStreep from last night. When u have a broken heart...turn it into art. You are astounding! #fangirlpic.twitter.com/gPmoprWLLg

Celebrities across the globe cheered Ms Streep online, with her Fantastic Mr Fox co-star George Clooney adding his endorsement to that of others.
Meryl Streep was nominated (for the 30th time!) for a Best Actress - Comedy/Musical Globe for her work in Florence Foster Jenkins.
The award was won by Emma Stone for La La Land.