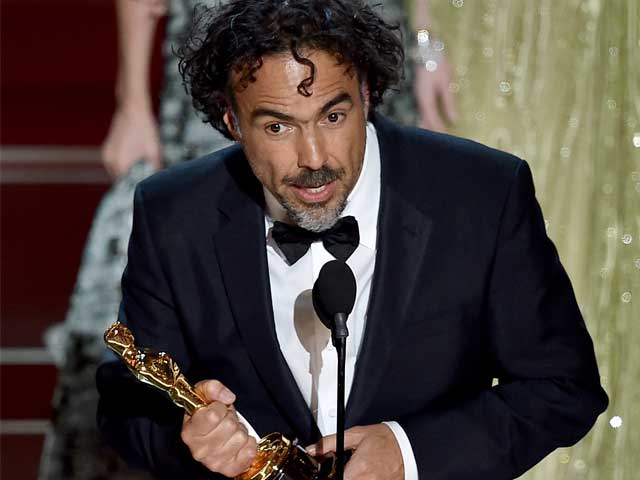 Years after playing 1980s rock music as a popular radio DJ in Mexico, film-maker Alejandro Gonzalez Inarritu was back behind a microphone on Sunday: To accept the Oscar for best director.

Inarritu -- the creative force behind dark comedy Birdman - became the second Mexican in a row to win Hollywood's top directing prize, one year after countryman Alfonso Cuaron was rewarded for space thriller Gravity.

"All the work of these incredible fellow filmmakers can't be compared, can't be labeled, can't be defeated, because they exist and our work only will be judged, as always, by time," Inarritu said as he accepted his award, speaking of his fellow nominees.

Inarritu and his friends Cuaron and Guillermo del Toro have been dubbed the Three Amigos, heading a golden generation of Mexican film-makers who have scooped up the industry's most prestigious prizes in recent years.

Birdman, starring Michael Keaton as a washed up superhero movie star attempting to revive his career on Broadway, marks a break from Inarritu's somber dramas.

While he shot to fame with his 2000 Mexican drama Amores Perros, and earned his first Oscar directing nomination for the Brad Pitt-starring Babel in 2006, the 51-year-old Inarritu came late to the movie world.

A music lover, Inarritu started working for WFM radio in the 1980s while he was still a communications student at Mexico City's Iberoamerican University.

But true to his adventurous spirit -- he traveled the world as a cabin boy in a merchant vessel at the age of 19 -- he took his chances, trading the microphone for a camera.

"I think that I'm a musician before I am a film-maker -- a frustrated musician," Inarritu once said, comparing his films to musical genres.

Amores Perros, he said, is a rock song while the crime drama 21 Grams is jazz, "Babel" amounts to an opera and "Biutiful" is a requiem.

Inarritu left WFM in the 1990s to make television advertisements and short films for his production firm, Z Films, while learning the craft from Polish-born theater director Ludwik Margules.

It was during that time that he met screenwriter Guillermo Arriaga, with whom he made Amores Perros -- a raw drama in which three stories collide after a car crash in Mexico's sprawling capital.

His debut feature earned Inarritu a big ovation at the Cannes film festival, where it won the Critics' Week prize in 2000.

"He follows the emotions and psyche of his characters meticulously, making him one of the best directors of actors in the world," Bauche said.

She recalled an anecdote on the set of Amores Perros that highlighted the "deeply spiritual" side of Inarritu, a father of two who lost a third child shortly after birth.

Inarritu had carts full of roses brought to the set, asked the actors to gather around the flowers and exhorted them to do "everything with love and passion."

He capped the moment by tossing petals skyward as an offering to god, she said.

On the back of the film's success, Inarritu moved to Los Angeles, where he directed other somber dramas packed with Hollywood stars.

But a bitter break with his film partner, Arriaga, was to follow. The screenwriter felt that his role in "Babel" - which earned an Oscar and six other nominations -- was underplayed, and he vowed never to work with Inarritu again.

Inarritu went on to make Birdman, which some critics have hailed as a masterpiece, though the director doubts it.