Nicole Kidman on Director 'Who Drove Her Nuts', 'Stealing From Bollywood' 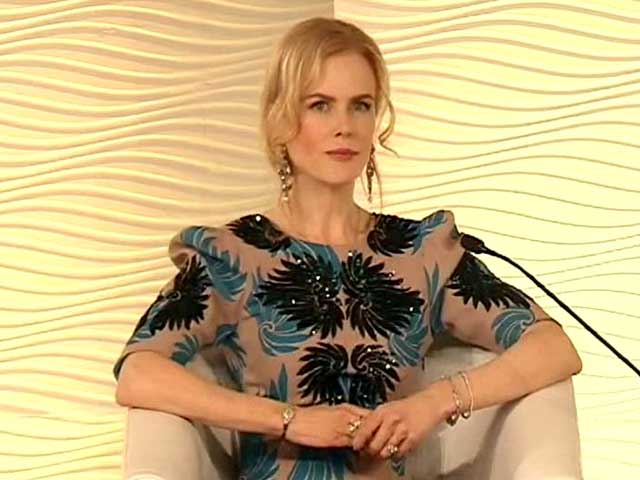 Hollywood actress Nicole Kidman's has been a life less ordinary. The journey to stardom has not been easy for the Australian actress whose first role was a 'bleating sheep' in a school Christmas pageant. Nicole, 48, participated in a session at the Hindustan Times Leadership Summit, moderated by author Suhel Seth. The Oscar-winning actress spoke about the transition from Australia to Hollywood, her love for adventure, India and Bollywood, being a feminist and the need for education in a country like India where gender inequality was rampant.
About her struggle, Nicole revealed, "I would catch the bus to drama school on a Saturday morning at 6 am. I would go and train and a director Jane Capian saw me and said I want that girl. Mad Max director George Miller saw me and put me in a film called Dead Calm (1989). I was 19 when I did that film and I went from a child in an acting school to a girl who was immediately working. But that can be hard for a child. But I never saw myself as just coming to America. For Dead Calm I learnt to sale and I got to learn things in life that I wouldn't get to do in any other job.
I'm malleable because I've worked with so many directors. The job is to bring truth, ideas and primarily to make another living breathing. When I did Paper Boy, I basically existed as the character for three weeks. Sam Mendes, a wonderful theatre director said one thing actors can't do is to have both technique and truth. You have to train yourself to do it again and again even though you are literally exhausted in the end."
A self-confessed lover of Bollywood films, Nicole revealed that she had been visiting India since 17 'as an Australian who wanted to see the world.' The Moulin Rouge! actress said, "I came here when I was 17 to Mumbai. I am an adventurer, love meeting different people, trying different food and smells. We stole a lot from Bollywood in Moulin Rouge!. I watched a lot of Bollywood films and fell in love with them. I tried to do that in Moulin Rouge! but it was incredibly hard to emulate."
The actress dwelled at length about working with her Eyes Wide Shut director Stanley Kubrick, revealing that working with him was 'extraordinary' and that she 'collpased on the floor' when she heard of his death. "It was like being with a professor. He had a very paternal role in my life and contributed a lot to my growth. When I got a phone call that he had died, I remember collapsing on the floor. He was a true genius. His movies never fell off. They say great directors have a 'period of 2-4 years' but Kubrick completely defied that. His works were great works of art and philosophical."
Asked about the director who 'drove her nuts,' Nicole said, "Most people would think it would be Stanley Kubrick because 'he must be crazy.' However but I said I must be crazy because I didn't find him crazy at all. The most important thing is to be supporting and positive, I don't believe in glass half empty and that's what I offer that to my directors. I forgive very easily. As long we are all searching for something important in the end."
Nicole's passion for causes and feminist streak, came from a family that 'comes with a powerful social conscience.'
"Every night we would sit at the dinner table and discuss issues. I was lucky to have parents. My father was a biochemist. When he died last year, so many people came up to us and said 'I'm here because your father helped me and saved my life.' I am a feminist, a young feminist. My mother is a middle age feminist. It is a male-dominated world and there is the need for female equality," the actress said.
The Moulin Rouge! star, who has two children, Faith and Sunday, with her husband Keith Urban seems to have found the fine balance between her work and personal life, saying that she had a 'very quiet family life.' "I Have created a tight and intimate family. I have a wonderful father and husband."
If you were to do your next theatre, the role she would like to play would be. Nicole said, "Theatre is an extraordinary place to be. Most of the great roles are written for females. I'm a great supporter of new plays and new talent. Our job is to pass it on and pass it on to the new generation. I'm considered 'erratic' in my choices because I believe in taking a lot of risks. I have two small girls right now who see me doing that and are now talking about acting and directing. And they are empowered now."
Asked if she had ever imagined that she would love this life, Nicole said, "I do believe if you keep your ideas alive, the vision you see can happen. I come from a scientific academic family, my husband's family is into farming. I would dream I would act around the world. From when I was four, I sought drama schools and kept searching for places to go to make that happen."
Nicole, who will next be seen in Lion (2016), where she plays a parent who adopts a young Indian boy, said it was an 'unbelievably emotional love story.' She is also about to begin work on an HBO series which she is producing as well as starring in.
She has also been busy filming the science fiction romantic-comedy How to Talk to Girls at Parties where she plays an alien from outer space who is on a tour of Earth.
Watch