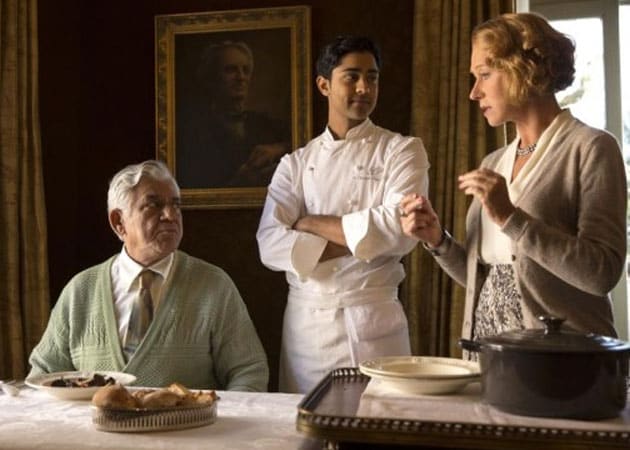 A still from the movie The Hundred-Foot Journey

The museum described Mr Puri as a "prolific and internationally renowned actor" known for films like East Is East, My Son the Fanatic and Mirch Masala.

Veteran Indian actor Om Puri was honoured by a renowned museum here for his contribution to cinema through a special tribute that showcased clips from some of his finest films and highlighted the actor's journey from a theatre student to one of the most prominent actors. The tribute featuring Mr Puri, 63 was held at the Museum of the Moving Image, the only American museum devoted to film, television and digital media.
The tribute programme was followed by a preview screening of his latest film The Hundred-Foot Journey, in which he co-stars with Academy-Award winning actress Helen Mirren.
In the film, Mr Puri plays the patriarch of a family displaced from their native India and trying to settle into a new life in France.
Mr Puri said his new movie is a "pleasant film with no guns and stunts. "Food is a character in the film," he added. Mr Puri, in conversation with award-winning actress and bestselling cookery author Madhur Jaffrey, spoke about his journey in the world of cinema, beginning from his days as a young student at the National School of Drama (NSD) in New Delhi and the Film and Television Institute of India in Pune.
He said since he was "not traditionally good looking" he joined the film institute in Pune hoping to enter the Hindi film industry, where being an alumnus of the institute would give him recognition and acceptance. "To get into films, the kind of looks you were supposed to have for the Hindi film industry, we did not have. Fat noses have no place in the Hindi film industry unfortunately," Mr Puri said.
Mr Puri along with actor Naseeruddin Shah, who had studied with him at NSD, went to Mumbai after their training in Pune and "at least we were given hearing" since they hailed from the film institute, he said.
One of Mr Puri's finest works is considered the 1983 acclaimed movie Ardh Satya directed by Govind Nihalani. Puri, who came to Mumbai in 1976, won a National Award for his portrayal of an idealistic policeman struggling to deal with corruption in the government machinery.
Mr Puri said Ardh Satya "was my lottery in the Hindi film industry. Everybody sat back and noticed me in this film," he said adding that he was "emotionally ready to play" the part of the policeman since from his younger days the "disparities in society used to disturb me."
Mr Puri, who has worked with acclaimed international actors like Jack Nicholson and Patrick Swayze, said there is always something to learn from his co-actors. Mr Puri added that he admires directors who allow actors to go over the scene and then guides them. "Otherwise at best you are following the director. Let it come from the actors and then they should be directed," he said. (Also read Om Puri to play General Kayani in biopic on Malala )
The museum described Mr Puri as a "prolific and internationally renowned actor" known for films like East Is East, My Son the Fanatic and Mirch Masala.