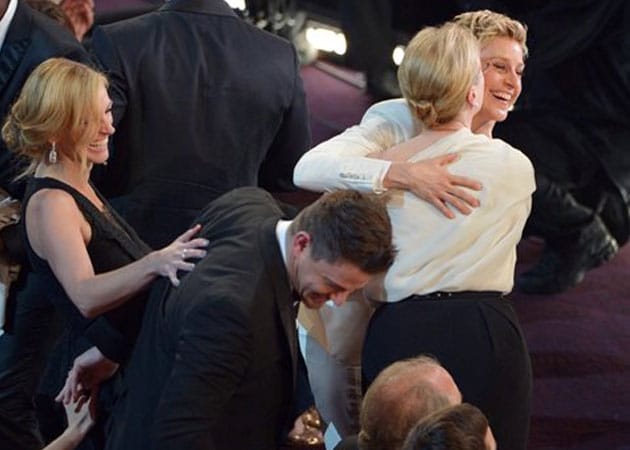 With only a week to catch our breath after the lengthy cavalcade of Winter Olympics coverage, this year's Oscarcast may have seemed a refreshingly snug handout of awards.

With only a week to catch our breath after the lengthy cavalcade of Winter Olympics coverage, this year's Oscarcast may have seemed a refreshingly snug handout of awards. After all, it lasted only slightly more than three and a half hours, aired on ABC from a single venue (Hollywood's Dolby Theatre), and was emceed by the comfortably reliable Ellen DeGeneres.
By comparison to the Sochi games, Oscar went by in a flash.
Meanwhile, it had its high moments and a bare minimum of deficits, easily catalogued in cinematic terms: Great scene! Or best left on the cutting-room floor.
-- Great Scene: The show's kickoff, which, unlike so many years before, wasn't an extravagant comedic film featuring the host with a bevy of stars, but instead, found DeGeneres arriving on stage to deliver her simple, but satisfyingly funny, monologue.
In gently wry style, she ribbed celebs in the hall as well as show biz in general. (The nominees, she declared, had collectively made over 1,400 films, "and you've gone to a total of six years of college.")
Then she brought on the first presenter. Brisk and efficient.
After that, she kept the energy flowing through a broadcast predictably sparse in surprises among those who won. Unlike many hosts, she was a regular presence, at one moment gathering stars in the audience for a group selfie to tweet, at another bringing in a pizza delivery guy to share slices with audience members (and then confessing she had no money to pay the bill: "Where's Harvey Weinstein?").
DeGeneres did what any host should do: Stay involved and make sure everyone has fun.
At the same time, she seemed to be committed to an unspoken theme for the evening: Humanize Hollywood's glitterati for the viewers. In return, the stars were on their best behavior.
-- Great Scene: Best supporting actor (for Dallas Buyers Club) Jared Leto's acceptance speech paid tribute to his mother, thanking her "for teaching me to dream," then celebrated the dreams "in places like the Ukraine and Venezuela" -- before pledging his support to those who have felt injustice "because of who you are or who you love." He was the night's first winner, and, in accepting his trophy, also pulled off a humanistic hat trick.
-- For the Cutting-Room Floor: The ironic spectacle of veteran actress Kim Novak, who was a presenter in the category of animation but, at age 81, revealed an eerily baby-smooth face that seemed frozen in place.
-- Great Scene: Musical number with Pharrell Williams performing his nominated song, Happy.
-- Great Scene: U2 performing their nominated song, Ordinary Love.
-- Great Scene: Pink performing Over the Rainbow against panoramic clips from The Wizard of Oz in a salute to that beloved film's 75th anniversary.
-- Great Scene: A particularly moving presentation of the In Memoriam roll, free of distracting applause from the audience. After the faces and names of the departed had been seen, Bette Midler sang the evocative Wind Beneath My Wings.
-- For the Cutting-Room Floor: Superfluous remarks from the president of the Academy, a mission statement whose pace-arresting effect was underscored by DeGeneres a moment later when she cracked, "Good luck following that, Amy Adams and Bill Murray!"
-- Great Scene: The heartfelt acceptance spilling out of best supporting actress Lupita Nyong'o (12 Years a Slave), who made it clear she understood that "so much joy in my life is thanks to so much pain in someone else's."
-- For the Cutting-Room Floor: The format of introducing the nine best-picture nominees, bunched in groups of threes, giving each film short shrift. Isn't there a better way of giving viewers a fitting sense of these contenders, which, after all, are the heart of what the Oscars is all about?
-- Great Scene: The evening's finale, a joyous reception for best picture winner 12 Years a Slave. All in all, a sleek show was the Oscarcast. Few bombshells, fewer embarrassments, from fade-in to fade-out.
Then, in cinematic terms, that was a wrap.