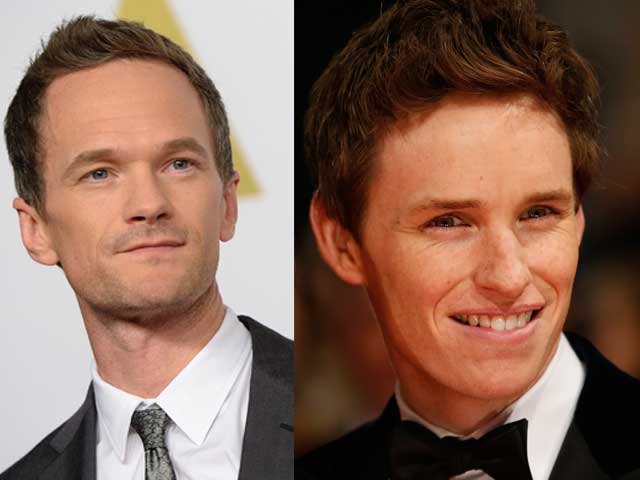 Neil Patrick Harris (left) will host the Oscars for the first time and actor Eddie Redmayne leads the Brits pack as a favorite for Best Actor (Image courtesy: AFP)

The new host, politically charged acceptance speeches and a new trend are few things to look out for at the 87th Academy Awards

The Academy Awards have seen their fair share of "moments" - both scripted and unscripted - over the years. (Also Read: Trivia: 10 Things You Didn't Know From Oscar History)

New Host
All eyes will be on Neil Patrick Harris, who has the tough task of following widely-praised Ellen DeGeneres as Oscars host. The Emmy-winning 41-year-old is not short on talent - his past hosting duties include the Emmys and Broadway's Tonys, and he can sing and dance with the best of them - but how will he make his Oscars mark? Watch for that opening monologue/set piece.

Viral Moment
Speaking of Ellen, the daytime talk-show hostess nearly broke the Internet with her famed selfie with Bradley Cooper, Meryl Streep and a host of other stars at last year's show. Can Neil - or anyone else - top that this year? Watch out for those smartphones.

Brit Invasion
The Brits are in town again, and this time in force: Eddie Redmayne leads the pack as a favorite for Best Actor as astrophysicist Stephen Hawking in The Theory of Everything, but other nominees include Benedict Cumberbatch and Keira Knightley (The Imitation Game), Felicity Jones (The Theory of Everything) and Rosamund Pike (Gone Girl).

Fashion Alert
The parade of stars on the Oscars red carpet is, for some, almost as big a show as the Academy Awards themselves. Who will wear what? What colors will be in (and out)? Will anyone make a fashion statement on the scale of Bjork in her swan dress at the 2001 Oscars? Or Lady Gaga emerging from her egg at the 2011 Grammys? Watch out, Lady Gaga is due to perform at this year's Oscars.

Name Game
Saturday Night Fever and Pulp Fiction icon John Travolta is among a star-studded line-up of presenters - but he will be hoping to avoid a repeat of last year's mangling of Frozen songstress Idina Menzel's name (it came out as "Adele Dazeem"). Read those lips.

Finally Moore
Veteran actress Julianne Moore, a self-declared "late bloomer" at the age of 54, is hoping to make it fifth time lucky, after four previous Oscar nods. She is the frontrunner for best actress for her portrayal of a linguistics professor suffering from early-onset Alzheimer's in Still Alice.

Politics?
Probably the most famous political moment in Oscars history came in 1973 when Marlon Brando won for The Godfather - and refused the award, sending up on stage a native American woman to protest at the abuse of her kin by the film industry. Possible causes this year - the recent surge in police killings of African Americans? The lack of any black acting nominees? The Charlie Hebdo attacks? Watch those acceptance speeches.

Snowden Flick
Talking of politics, a movie about NSA whistleblower Edward Snowden could generate some debate: Citizenfour by US filmmaker Laura Poitras is a frontrunner for best documentary. Watch out for her speech, if she wins.

In Memoriam
Each year the show includes a segment dedicated to Hollywood greats who passed in 2014. This year, Tinseltown's biggest loss was comic actor Robin Williams, who committed suicide in August. Others mourned include The Graduate director Mike Nichols and actress Lauren Bacall, along with Britain's Sir Richard Attenborough and Bob Hoskins.