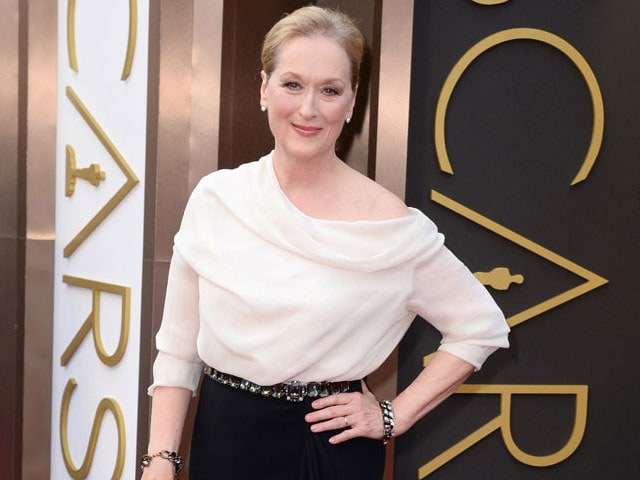 Everybody is afraid of Meryl Streep. Because by simply being in a film, Meryl Streep ensures that at least one actress will be consigned to the darkness in between the jockeying for position on the list of nominees and actually being on it

This is a story we find ourselves writing every year. Once again, like so many times before, Hollywood grand dame Meryl Streep will be occupying an Oscar berth that seems to have her name written on it in permanent marker. For it appears that she only has to be in a movie to be nominated for an award, unless it's a real doozy like Mamma Mia! and there haven't been many of those. (Also Read: Oscars 2015: Meryl Streep Scores Her 19th Nomination)

Ms Streep scored her 19th Oscar nomination this year. She's up for Best Supporting Actress for playing the wicked witch of fairy tales in Into The Woods - a film you may not have heard of, much less seen, but about which all you really need to know is that it stars Meryl Streep. The four actresses nominated with her are Boyhood's Patricia Arquette, Birdman's Emma Stone, Wild's Laura Dern and The Imitation Game's Keira Knightley. Ms Arquette, who has had a clean sweep so far this award season, is expected to send Ms Streep home Oscar-less, but that's beside the point.

Ms Streep is, of course, the most nominated actor in Oscar history. This is old news. She outstripped Katharine Hepburn and Jack Nicholson, both a distant second with 13 nominations, when she was nominated for The Devil Wears Prada almost a decade ago. In fact, so far ahead is she that keeping score seems pointless. She is one of six actors to have won three Oscars - the other five are Katharine Hepburn, Jack Nicholson, Walter Brennan, Ingrid Bergman and Daniel Day-Lewis. Meryl Streep won her Oscars for Kramer vs Kramer (Best Supporting Actress), Sophie's Choice and The Iron Lady (Best Actress, both).

The 19 nominations have been spread across 36 years, beginning in 1979 when she was up for Best Supporting Actress for The Deer Hunter. She lost. She lost for Out of Africa, she lost for Silkwood and Ironweed. She lost for The French Lieutenant's Woman, The Bridges of Madison County, The Devil Wears Prada, Julie & Julia and last year's August: Osage County.

Over three decades and a bit, she won less than 20% of the sum of her nominations. So who's afraid of Meryl Streep? The short answer is, everybody. Because by simply being in a film, Meryl Streep ensures that at least one actress will be consigned to the darkness in between the jockeying for position on the list of nominees and actually being on it. At least one actress will have been sacrificed to Meryl Streep's Oscar habit. This time, for instance, will Snowpiercer actress Tilda Swinton watch the show at home on TV and secretly be wishing Ms Streep had taken the year off?

Enjoy your Oscar, Patricia Arquette; and Academy, save a place on next year's list. Meryl Streep's next role is suffragette pioneer Emmeline Pankhurst.