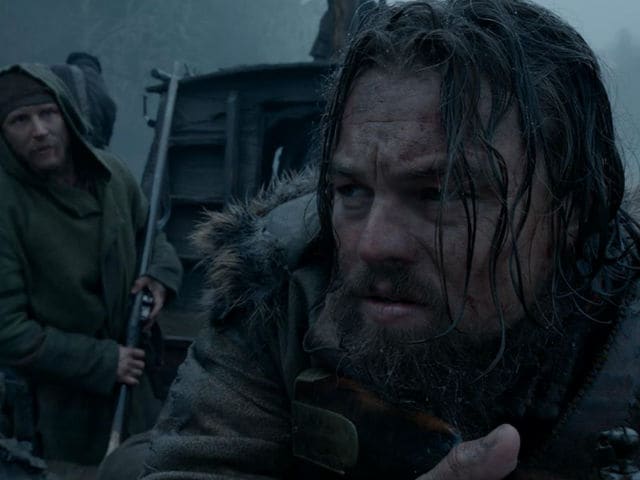 Leonardo DiCaprio in a still from The Revenant

Industry watchers have been hard-pressed this year to predict which movies and actors will be headed for glory at the Academy Awards on February 28. About the only sure thing that pundits agree on? A nomination for Leonardo DiCaprio for The Revenant - a big winner at Golden Globes with three prizes

Hollywood was waiting with bated breath for the unveiling early Thursday of the list of nominees for this year's Oscars, with The Revenant, The Martian, Spotlight and Carol among the strong contenders.
Industry watchers have been hard-pressed this year to predict which movies and actors will be headed for glory at the Academy Awards on February 28 - the pinnacle of Tinseltown's awards season - and many are betting on some surprises.
The nominated films, actors and filmmakers are revealed at a pre-dawn ceremony in Beverly Hills.
"This is a wide open year with no clear frontrunner at this point," said Pete Hammond, the chief film critic for Deadline Hollywood, an entertainment industry website.
"It might take a while to get it all sorted out but I think there are numerous movies in the hunt."
About the only sure thing that pundits agree on? A nomination for Leonardo DiCaprio, who portrays 19th century fur trapper Hugh Glass in revenge thriller The Revenant - a big winner at Golden Globes with three prizes.
Beyond that, the field widens. Apart from The Revenant, other top contenders for Best Picture include the space hit The Martian - which took home two Golden Globes for Best Film (Comedy or Musical) and Best Actor (Comedy or Musical) for Matt Damon, who could be Leonardo's main rival.
Spotlight, about sex abuse in the Catholic Church, The Big Short, on the sub-prime mortgage crisis, and dystopian action movie "Mad Max: Fury Road are also expected to be Oscars threats.
Those five films earned nominations this week for the Directors Guild of America (DGA) award, which is considered an Oscars bellwether.
Other movies expected to be in the Oscars hunt are lesbian romance Carol, Straight Outta Compton, about the pioneering rap group N.W.A., Steven Spielberg's Cold War drama Bridge of Spies and Room, about a kidnapped woman raising her son in captivity.
'Leo is Getting Nominated'
In the Best actor Race, Leonardo's strong performance is almost sure to earn the 41-year-old actor not only a nomination, but his first Oscar, industry watchers say.
"Leo is getting nominated, everyone knows that," said Scott Feinberg, awards columnist for trade magazine The Hollywood Reporter, adding it was a "slam dunk" that the actor would go on to win.
The movie is directed by Alejandro Gonzalez Inarritu, whose film Birdman won four Oscars last year including for Best Picture and Best Director. (Also Read - Golden Globes: Big Night for Leonardo DiCaprio and The Revenant)
Should Mr Inarritu win again this year for The Revenant, he will be joining just two other directors - Joseph Mankiewicz and John Ford - who won the award for two consecutive years.
Apart from Leonardo, other actors tipped to earn nominations are Matt Damon, Bryan Cranston for Hollywood biopic Trumbo and Eddie Redmayne - last year's winner in the same category - for The Danish Girl.
In the Best Actress category, top picks are Cate Blanchett for Carol; Saoirse Ronan for Brooklyn, about a young Irish immigrant navigating her way in 1950s New York; Golden Globe winner Brie Larson for Room; and British veteran Charlotte Rampling for 45 Years, about a couple on the edge.
Ms Rampling and her co-star Tom Courtenay have received wide acclaim for their performances.
Sylvester Stallone is also being touted as a possible contender for Best Supporting Actor for Creed, in which he reprised his iconic role of boxer Rocky Balboa.
"He has a lot of momentum behind him," Mr Feinberg said of Mr Stallone after the actor's Globe win on Sunday.
Last year, the Academy was accused of lacking diversity in its slate of Oscar nominees - with the hashtag #OscarsSoWhite trending on social media - and some say the same may happen this year.
The only black actor that could score a nomination for a best supporting role is Idris Elba for Beasts of No Nation, but he may face stiff competition from Mr Stallone.
Will Smith could earn a Best Actor nomination for NFL drama Concussion, but he would be competing with Leonardo.
The Academy of Motion Picture Arts and Sciences is made up of some 6,000 members who work in the film industry and who select the nominees for the Oscars.