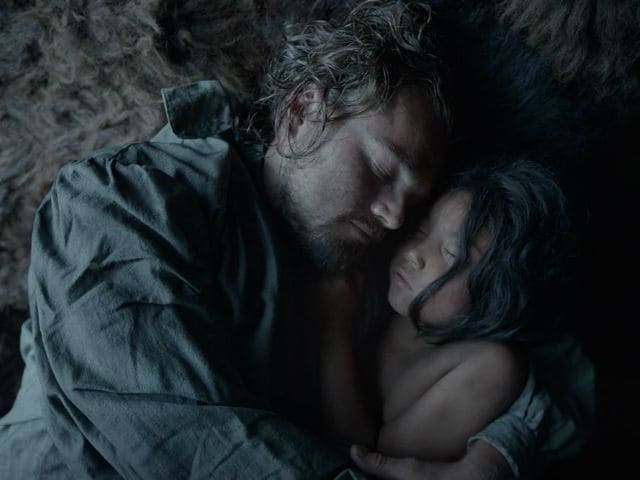 A still from the film The Revenant

Hollywood elite is looking forward to the usual sparkling night of celebration, with survival epic The Revenant leading the charge for golden statuettes. Alejandro Gonzalez Inarritu's The Revenant is the overall frontrunner, with 12 nominations, followed by George Miller's Mad Max: Fury Road with 10

Hollywood hits the Oscars red carpet Sunday for its annual show of glitz and pageantry honoring cinema's finest - with a broiling row over diversity an awkward guest at the party.
Tinseltown's elite are looking forward to the usual sparkling night of celebration, with survival epic The Revenant leading the charge for golden statuettes and a panoply of rivals snapping at its heels.
But controversy over the "whitewashing" of nominations - there are no ethnic minority nominees in the acting categories for the second year running - threatens to steal the limelight.
An audience expected to number several hundred million around the world will be hanging on every word uttered by black comedian and actor Chris Rock, who is hosting despite calls for him to join a boycott.
Insiders say the 51-year-old has completely rewritten his opening monologue in the wake of the scandal, which could prove embarrassing for the Academy's 6,000-plus voting members, overwhelmingly white men.
The funnyman appeared in relaxed mood hours before the ceremony, posting a picture of Oscars note paper bearing the phrase "Get ready" and, soon after, a video of him ordering breakfast at a McDonald's drive-thru.

Hopes for a safe, predictable start looked promising, with the rain clouds that have marred previous red carpet arrivals nowhere in sight for the 88th Oscars ceremony, which begins at 5:30 pm (0130 GMT Monday) at Hollywood's Dolby Theatre.
Old Hollywood Hands
If the weather can never be entirely reliable, analysts have predicted with an unusual degree of certainty that Sunday will be a night of long overdue glory for old Hollywood hands who have previously missed out.
Jaws will drop if best actor doesn't go to Leonardo DiCaprio for The Revenant, 22 years after his first of five acting nominations.

Good luck Leo! Everyone loves you because you're the best. Meet me at the clock anytime bruv X pic.twitter.com/buPmIdhYyo

A widely-anticipated best supporting actor Oscar for Sylvester Stallone, who reprises his turn as underdog boxer Rocky Balboa in Creed, would be one of the stories of the night, almost four decades after his only other nominations -- for best actor and screenplay for the franchise's original outing, Rocky.
The 69-year-old shared a picture on Instagram of him dressed in a dark blue dinner jacket with black and blue lapels and a black shirt and bowtie, captioned:

On my way to the Oscars... It's been a most memorable year.

First-time nominee Brie Larson looks to be a lock for best actress, having dominated the awards season with her performance as a kidnapped mother in Room.
Best Supporting Actress favorite Alicia Vikander (The Danish Girl) faces tough competition from Carol star Rooney Mara, on her second nomination, and previous best actress winner Kate Winslet, acclaimed for her work in Steve Jobs.
Spotlight, about child abuse in the Catholic Church, and Wall Street satire The Big Short look like safe bets for the original and adapted screenplay honors after being recognized by the Writers Guild.
Alejandro Gonzalez Inarritu's The Revenant is the overall frontrunner, with 12 nominations, followed by George Miller's stark action epic Mad Max: Fury Road with 10 and Ridley Scott's space adventure The Martian, with seven.
Surprises will happen
The Gold Derby website, which aggregates experts' predictions, has The Revenant in the lead for best film, but analysts are split on whether Inarritu will also pick up best director for the second year running following his win for Birdman.
"I think The Revenant will win best picture and the director will go to Miller," said Hollywood analyst Anne Thompson.
"It would be unlikely that the Academy would reward a genre sequel like 'Fury Road' with best picture, but they have gone with directors like Ang Lee and Alfonso Cuaron for well-mounted spectacles like Life of Pi and Gravity."
"As many people are saying, this is an unusual year when surprises will happen," she added.
The night will also feature some social activism: several stars including Oscar winner Patricia Arquette and past nominee Steve Carell will wear bracelets to promote a campaign against gun violence.
And Vice President Joe Biden will introduce a song by Oscar nominee Lady Gaga to push an initiative tackling sexual assault on US university campuses.
Gaga sang a duet with Elton John on Saturday at his pre-Oscars pop-up concert in West Hollywood, which drew thousands of fans to the Sunset Strip.
John organized the free event to thank the city for hosting his annual Academy Awards viewing party to raise funds for his AIDS foundation.