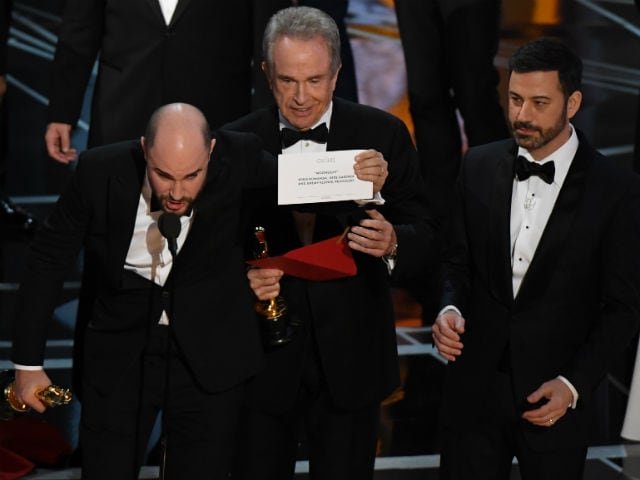 There's only one thing people of the Internet love more than an absolutely epic mistake on live television - conspiracy theories about how it could have happened. A few hours after Faye Dunaway and Warren Beatty announced La La Land as best picture at the Academy Awards (when the trophy actually belonged to Moonlight), PricewaterhouseCoopers, the longtime accounting firm in charge of the Oscar ballots, took responsibility and released an apology statement. Faye Dunaway and Warren Beatty were apparently given the envelope and card for the best actress category, which read Emma Stone, La La Land. Thus, the confusion. "The presenters had mistakenly been given the wrong category envelope and when discovered, was immediately corrected," the statement read in part. "We are currently investigating how this could have happened, and deeply regret that this occurred."
OK. Sure. But social media had other ideas: What if it wasn't just a simple mix-up? On ABC's official Oscars "After Party" special, before there was more information, host Anthony Anderson also seemed convinced it was all a conspiracy. Here are some of the theories floated in the early hours of Monday morning:
1. This was an especially mean prank from Oscars host Jimmy Kimmel.
The late-night host is famous for his practical jokes, from his YouTube hoaxes (the twerking girl on fire, the wolf at the Sochi Olympics); to urging parents to pretend they ate their kids' Halloween candy; to his holiday prank war with his neighbours, John Krasinski and Emily Blunt. So ... couldn't this just be a way to make his Oscars gig really, really memorable?
2. It's all Leonardo DiCaprio's fault.
Some eagle-eyed viewers noticed that Leonardo DiCaprio, who announced best actress, didn't give Emma Stone her card when she won. Uh oh - could he be responsible?
Later, Emma said she was in possession of the card; which is actually plausible, as there are two cards printed for each category. Either way, time for some suspicions about Leonardo DiCaprio's role in this madness.
3. This was a prank from Matt Damon on Jimmy Kimmel.
Throughout the entire ceremony, Jimmy mercilessly teased Matt Damon, extending their years-long "feud." Toward the end of the show, the announcer referred to Matt as Ben Affleck's "guest" when they presented an award, and music played over Matt Damon when he started talking. So it looked like Kimmel got the last laugh ... or did he?
4. The universe.
Ultra-dramatic, stunning upset victories and twists for the election, World Series, Super Bowl and now this? Maybe the universe is just having some fun.
5. "Liberals."
According to an email I got from a reader, anyway: "That's what happens when the liberals run things. The end is a huge mess! (smile emoji)"
Thanks
© 2017, The Washington Post
(Except for the headline, this story has not been edited by NDTV staff and is published from a syndicated feed.)