Oscars 2017: Why Both PwC Accountants Have Been Banned From Future Shows 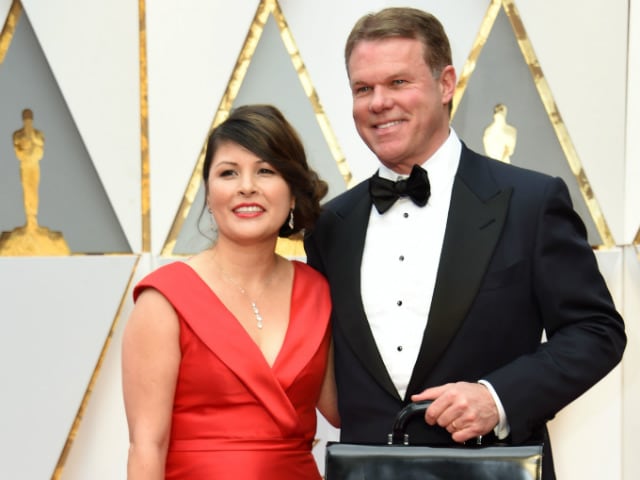 Oscars 2017: The accountants photographed on the red carpet (courtesy: AFP)

Three days after a spectacular error marred the final moments of the 89th Academy Awards, the president of the film academy declared that the two PricewaterhouseCoopers accountants responsible for the historic mistake would never work at the Oscars again.
Now, we have a better idea as to why.
In an exclusive interview with the Wrap, longtime Oscars stage manager Gary Natoli offered new details of how both accountants failed to prevent - and later, halt - the disaster that unfolded after Faye Dunaway mistakenly announced La La Land as the best picture winner. Both accountants should have known instantly that the correct winner was Moonlight - but instead of taking action, Natoli said, they both "froze."
"I'm sure they're very lovely people, but they just didn't have the disposition for this," Natoli told The Wrap. "You need somebody who's going to be confident and unafraid."
It was veteran accountant Brian Cullinan who handed co-presenter Warren Beatty the wrong envelope, containing a card awarding Emma Stone the best actress prize. But Cullinan and fellow "Oscar ballot leader" Martha Ruiz had both memorized every single winner, and both should have known instantly the moment the wrong best picture winner was announced.
Natoli said he was standing in the wings on the left side of the stage, where Ruiz was stationed, when La La Land was incorrectly announced the best picture winner.
"When La La Land was announced, she did not try to get my attention, she did not say anything," Natoli told The Wrap. "And she's supposed to have memorized the winners."
In an oddly prophetic interview with The Huffington Post days before the show, Cullinan and Ruiz had been asked what would happen if the wrong winner were accidentally announced on stage. Cullinan said that there wasn't a precise established protocol, as such a scenario was unprecedented.
"We would make sure that the correct person was known very quickly," Cullinan told The Huffington Post. "Whether that entails stopping the show, us walking onstage, us signaling to the stage manager - that's really a game-time decision, if something like that were to happen. Again, it's so unlikely."
After that interview, Natoli told The Wrap, Cullinan checked in with Natoli and stage manager John Esposito to make sure his answer had been correct: "In the interview, he said, 'Well, we would tell the stage managers and check with each other and react,'" Natoli said. "And then he said to us, 'Is that what we do?'"
The answer, Natoli said, was no: "I said, 'If you know who the winner is, you don't need to check with each other. You need to immediately go out and rectify the situation, ideally before the wrong winners get to the mic.'"
But that obviously didn't happen Sunday. Natoli said more than a minute had passed before he heard Esposito through his headset, asking if Ruiz could check her envelope because Cullinan thought they'd announced the wrong winner. In the meantime, the cast and crew of La La Land had made their way to the stage and begun delivering acceptance speeches.
In the face of a spectacular calamity, both accountants seemed surprisingly disengaged, Natoli said. "She was standing there with the envelope in her hand, very low key," he said, describing Ruiz's reaction. "And John Esposito said that Brian was very low-key too, no urgency."
When they opened the second envelope and confirmed that the wrong best picture had been announced, Natoli said he told the stage managers to get the accountants onstage, according to The Wrap.
"John was trying to get Brian to go on stage, and he wouldn't go," Natoli said. "And Martha wouldn't go. We had to push them on stage, which was just shocking to me."
In statements Sunday and Monday, Pricewaterhouse Coopers took "full responsibility" for the mistake. The firm did not name Ruiz in its statements, but noted: "Once the error occurred, protocols for correcting it were not followed through quickly enough by Mr. Cullinan or his partner."
The two accountants have not spoken publicly about what happened, and PwC has not responded to recent requests for comment from The Washington Post.
In the aftermath of the debacle, focus swiftly turned to Cullinan's behavior backstage: Moments before he handed the wrong envelope to Beatty, Cullinan had tweeted a photo of Emma Stone posing with her statuette backstage.
In an interview Wednesday with the Associated Press, academy president Cheryl Boone Isaacs expressed frustration over the accountants' failure to concentrate on the task at hand.
"They have one job to do. One job to do!" Boone Isaacs told the Associated Press. "Obviously there was a distraction."
The academy was continuing to review its 83-year relationship with Pricewaterhouse Coopers, she said. The protocols for handling the winners' envelopes were also under review.
"It never happened before and we never are going to have it happen again," she said. "And we are setting new guidelines, new protocols and really re-examining every step to make sure this never ever, ever happens."
(c) 2017, The Washington Post
(Except for the headline, this story has not been edited by NDTV staff and is published from a syndicated feed.)