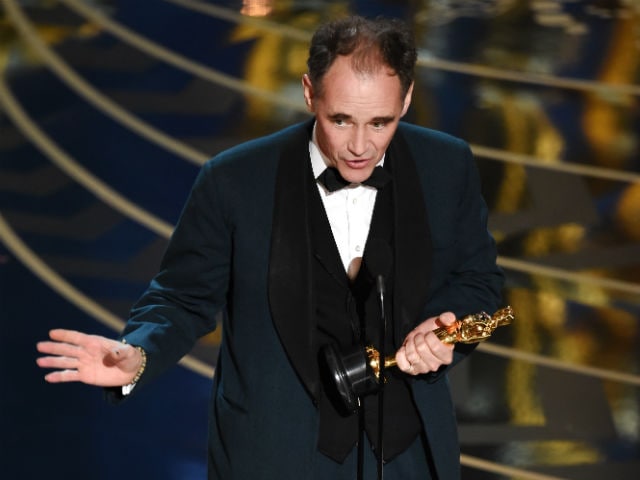 Mark Rylance's win was the first true surprise of the night, as he bested sentimental favourite Sylvester Stallone (Creed), as well as Christian Bale (The Big Short), Tom Hardy (The Revenant) and Mark Ruffalo (Spotlight). "I want to just say thank you to my fellow nominees," said Mark Rylance after receiving his award

Long regarded as Britain's best stage actor, Mark Rylance is now Hollywood royalty also after winning the best supporting actor Oscar on Sunday for Bridge of Spies.
His role along with Tom Hanks in the Steven Spielberg-directed Cold War thriller showed the 56-year-old can turn in as powerful a performance on the silver screen as he does treading the boards in London's West End.
Mr Rylance's win was the first true surprise of the night, as he bested sentimental favourite Sylvester Stallone (Creed), as well as Christian Bale (The Big Short), Tom Hardy (The Revenant) and Mark Ruffalo (Spotlight).
"I want to just say thank you to my fellow nominees. I don't know how did they separate my acting from your glorious acting in these wonderful films that you are in," Mr Rylance said after receiving his award.
"It's a wonderful time to be an actor and I'm proud to be a part of it," he added.
This month, Mr Rylance won a best supporting actor Bafta for his role, which was a breakthrough for a star whose biggest successes until now had come in the theatre and on television thereafter.
A fan of crop circles and a campaigner for causes such as opposing air strikes in Syria, the environmentally-conscious Rylance drives a tiny electric car around London.
Globe, Broadway and Hollywood:
The son of two English teachers, Mr Rylance was born David Waters in Kent, southeast England, in 1960 but spent much of his childhood in the United States.
He trained at the prestigious acting school, the Royal Academy of Dramatic Art (RADA) in London and took the stage name Mark Rylance - his two middle names.
He built a successful career as a young actor, often performing with the Royal Shakespeare Company (RSC).
In 1995, he became the first artistic director of the Globe Theatre - a reconstruction on the banks of London's River Thames of a theatre dating back to the 16th century, which stages authentic period performances of plays by William Shakespeare and others.
Over 10 years, Mr Rylance put the Globe on the map as one of London's must-visit destinations with a string of innovative shows, including with all-male casts.
After stepping down from the Globe in 2005, Mr Rylance took some high-profile parts which showed there was more to him as an actor than just Shakespeare.(Also Read: Oscars 2016: Leonardo DiCaprio's Win Becomes Most Tweeted Moment)
His roles as bawdy waster Johnny "Rooster" Byron in Jerusalem and in the farce Boeing-Boeing won him Tony awards. A third came in 2014 for his role as Olivia in Shakespeare's Twelfth Night.
But tragedy struck in 2012 when the sudden death of his stepdaughter forced him to pull out of performing in the opening ceremony for the London Olympics.
In 2015, Mr Rylance became a household name in Britain after starring as Thomas Cromwell in Wolf Hall, a drama set in the court of Henry VIII and based on books by Hilary Mantel.
This role also won him an Emmy nomination, although he lost it to Richard Jenkins for Olive Kitteridge.
Mr Rylance married director Claire van Kampen in 1989 and the two frequently work together. Last year, he featured in her play Farinelli And The King.