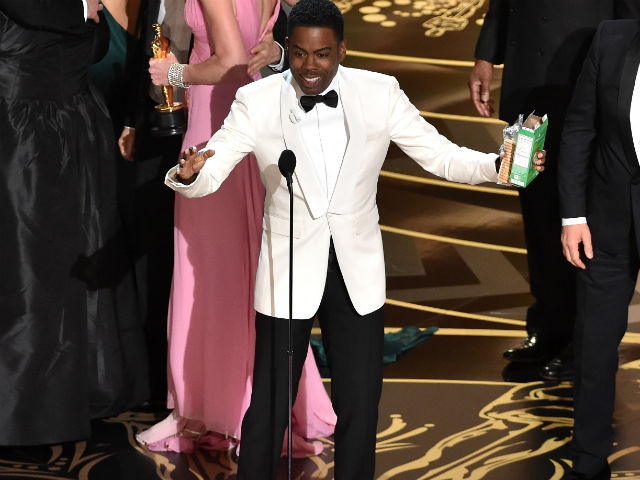 "It's not about boycotting anything. It's just, we want opportunity. We want the black actors to get the same opportunities as white actors. That's it. That's it. Not just once, you know? Leo (Leonardo DiCaprio) gets a great part every year. And, you know, and, everybody, all you guys get great parts all the time," said Chris Rock

Sunday's conflicted Oscars telecast (Should we have felt bad for watching? Should we have summoned the resolve to skip it altogether? Can a satisfyingly diverse film industry ever come to pass?) turned out to be just as long as an unplanned stay on Mars and as self-satisfied as any other Oscar telecast of the last decade or so. Fury Road? More like Suppressed Anger Boulevard.
Chris Rock delivered a highly scrutinized and fairly funny opening monologue - and said he considered turning down the job of hosting the 88th Academy Awards ceremony ("Otherwise known as the White People's Choice Awards," Rock joked) after the academy's members once again collectively failed to nominate black performers and artists in major categories.
"People are like, 'Chris, you should boycott. Chris, you should quit.' How come it's only unemployed people that tell you to quit something, you know? No one with a job ever tells you to quit," Rock said. "So I thought about quitting. I thought about it real hard. But I realized, they're going to have the Oscars anyway. They're not going to cancel the Oscars because I quit, you know?"
That was more or less the evening's tone - the inevitability of an event that still meaningfully impacts our popular culture and still has many of its deepest, perhaps permanent, flaws. This year's answer was to feature an African American delivering sharp commentary that was calibrated to singe rather than burn. After coming out to the recognizable beat of Public Enemy's 1989 song Fight the Power, Rock's medicine could have been stronger, more angry and absolutely necessary, considering the captive audience of Hollywood's top brass. Viewers kept waiting for Rock or another presenter to cross a line that needs to be crossed more often, not just on Oscar night.
In another highlight from his monologue, Rock talked about a time he attended a political fundraiser in Los Angeles featuring President Obama - where most of the attendees were white, Hollywood liberals.
"Here's the real question," Rock said. "Is Hollywood racist? You know. You got to go at that at the right way. Is it burning cross racist? No. Is it fetch me some lemonade racist? No, no. It's a different type of racist. It isn't the racist you've grown accustomed to. Hollywood is sorority racist. It's like - 'We like you, Rhonda, but you're not a Kappa.' That's how Hollywood is."
Rock added: "It's not about boycotting anything. It's just, we want opportunity. We want the black actors to get the same opportunities as white actors. That's it. That's it. Not just once, you know? Leo (Leonardo DiCaprio) gets a great part every year. And, you know, and, everybody, all you guys get great parts all the time."
But it was the prerecorded comedy bits later in the show that seemed to deliver a stronger message (Angela Bassett narrating a Black History Month tribute to white actor Jack Black. A montage of what some of the nominated films might have looked like with black actors, including Tracy Morgan as The Danish Girl - "These danishes good, girl" - and Saturday Night Live's Leslie Jones as the fierce creature that attacks DiCaprio in The Revenant) and bringing out a troop of black Girl Scouts to sell cookies to the audience in the Dolby Theatre. Perhaps the best bit in the whole show featured Rock doing man-on-the-street interviews of movie-goers at a California cineplex in the south-central Los Angeles County city of Compton.
As Rock read the titles of this year's best picture nominees to one woman, she asked, "Where are you getting these movies from? I come to movies all the time."
"These are real movies," Rock insisted.
"Like in London and stuff?" she asked.
This was followed by a quick cut to white megastars in the audience (DiCaprio), laughing like people who know they're being watched laughing - a measurement of their ability to be part of the problem and yet sympathetic to it. It's so Hollywood. It's so awards show.
Because, in the end, that's what this is.
While the Oscars lack diversity, the show is always willing to try some new way to speed things along and keep viewers from peeling off.
In an effort to keep acceptance speeches from becoming a tedious list of names that the recipient feels obligated to thank, the Oscars tried a weather-alert style news crawl at the bottom, featuring all those names (pre-supplied by the nominees). This was somewhat effective, though it didn't result in profound (or shorter) speeches, most of which were still lists of names.
Sure, there were a few nice quips from presenters and recipients, but maybe the best line of the evening came early, from Jenny Beavan, who won best costume design for the apocalyptic Mad Max: Fury Road: "It could be horribly prophetic. Mad Max, if we're not kinder to each other," she said, "and if we don't stop polluting our atmosphere, so you know, it could happen." Too true.
As the show dragged on, Vice President Biden appeared to present one of the original song nominees, Lady Gaga, who performed Til It Happens to You from The Hunting Ground, a documentary about rape on college campuses. She was joined on stage by rape and sexual assault survivors - at least, that was the presumed message.
There will always be a reason to skip, on principle, the drudgery of watching the Oscars, just as there will always be moments in the ceremony that can be used to drive a point home.
As the show came to an end, the real goal remained elusive - to stage an Oscar ceremony that's simply can't-miss.
(c) 2016, The Washington Post