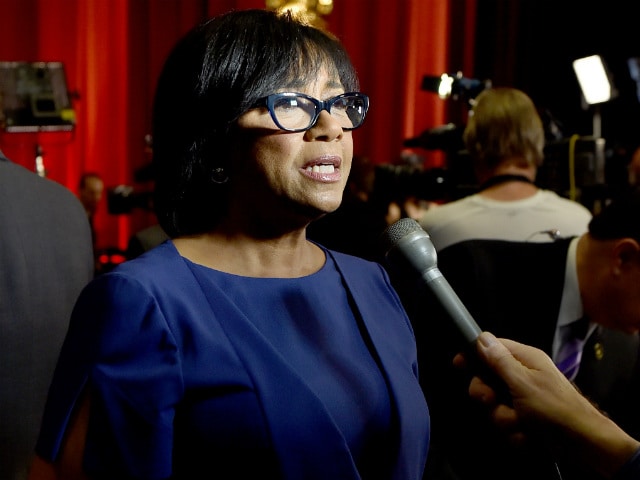 Cheryl Boone Isaacs at the Oscar nominations announcement on January 14 in Los Angeles.

Cheryl Boone Isaacs, president of the Academy of Motion Picture Arts and Sciences, said that while it was important to acknowledge the work of the actors nominated for the awards being given out on February 28, she was "both heartbroken and frustrated about the lack of inclusion"

Following an outcry over the all-white roster of actors nominated for this year's Oscars, the president of the film academy said on Monday that she was heartbroken by the lack of diversity and working to implement change.
"This is a difficult but important conversation, and it's time for big changes," Cheryl Boone Isaacs, president of the Academy of Motion Picture Arts and Sciences, said in a statement.
Ms Isaacs said that while it was important to acknowledge the work of the actors nominated for the awards being given out on February 28, she was "both heartbroken and frustrated about the lack of inclusion."
Earlier on Monday, filmmaker Spike Lee and actress Jada Pinkett Smith said they would boycott the Oscars ceremony because of the all-white slate of actors. Their nomination last week set social media abuzz with the hashtag #OscarsSoWhite.
Ms Isaacs, who is black, has pushed for more diversity in the Academy's ranks since her election in 2013.
But she acknowledged in her statement that "change is not coming as fast as we would like."
"We need to do more, and better, and more quickly," she said.
"In the '60s and '70s it was about recruiting younger members to stay vital and relevant. In 2016, the mandate is inclusion in all of its facets: gender, race, ethnicity and sexual orientation," she said. The Academy has some 6,000 members, all of whom work in the film industry and are elected by their peers for life.
According to a 2012 study by the Los Angeles Times, nearly 94 percent of the Academy voters are white and mostly male. The Times found that blacks account for two percent of the Academy and Latinos are less than two percent.
Oscar voters have a median age of 62, the Times study showed, and people younger than 50 constitute 14 percent of the membership.
'We can't act?
In announcing he would snub the Oscars ceremony, Mr Lee said in a message on Instagram that he could not support the "lily white" awards show. (Also Read: #OscarsSoWhite: Jada Pinkett Smith, Spike Lee to Boycott Show)

#OscarsSoWhite... Again. I Would Like To Thank President Cheryl Boone Isaacs And The Board Of Governors Of The Academy Of Motion Pictures Arts And Sciences For Awarding Me an Honorary Oscar This Past November. I Am Most Appreciative. However My Wife, Mrs. Tonya Lewis Lee And I Will Not Be Attending The Oscar Ceremony This Coming February. We Cannot Support It And Mean No Disrespect To My Friends, Host Chris Rock and Producer Reggie Hudlin, President Isaacs And The Academy. But, How Is It Possible For The 2nd Consecutive Year All 20 Contenders Under The Actor Category Are White? And Let's Not Even Get Into The Other Branches. 40 White Actors In 2 Years And No Flava At All. We Can't Act?! WTF!! It's No Coincidence I'm Writing This As We Celebrate The 30th Anniversary Of Dr. Martin Luther King Jr's Birthday. Dr. King Said "There Comes A Time When One Must Take A Position That Is Neither Safe, Nor Politic, Nor Popular But He Must Take It Because Conscience Tells Him It's Right". For Too Many Years When The Oscars Nominations Are Revealed, My Office Phone Rings Off The Hook With The Media Asking Me My Opinion About The Lack Of African-Americans And This Year Was No Different. For Once, (Maybe) I Would Like The Media To Ask All The White Nominees And Studio Heads How They Feel About Another All White Ballot. If Someone Has Addressed This And I Missed It Then I Stand Mistaken. As I See It, The Academy Awards Is Not Where The "Real" Battle Is. It's In The Executive Office Of The Hollywood Studios And TV And Cable Networks. This Is Where The Gate Keepers Decide What Gets Made And What Gets Jettisoned To "Turnaround" Or Scrap Heap. This Is What's Important. The Gate Keepers. Those With "The Green Light" Vote. As The Great Actor Leslie Odom Jr. Sings And Dances In The Game Changing Broadway Musical HAMILTON, "I WANNA BE IN THE ROOM WHERE IT HAPPENS". People, The Truth Is We Ain't In Those Rooms And Until Minorities Are, The Oscar Nominees Will Remain Lilly White. (Cont'd)

"How is it possible for the 2nd consecutive year all 20 contenders under the actor category are white? And let's not even get into the other branches. 40 white actors in 2 years and no flava at all. We can't act?!," Mr Lee said in his open letter to the president and board of governors of the Academy Awards.
Mr Lee, who won an Oscar last year for his lifetime achievements as a filmmaker and actor, blamed the executives who run Hollywood studios for the absence of minorities in Oscar-contending roles.
"People, the truth is we ain't in those rooms and until minorities are, the Oscar nominees will remain lily white," wrote Mr Lee, who is well known for his outspoken comments.
He suggested that Hollywood follow the lead of the National Football League, which requires that minorities be interviewed for head coach and senior executive positions when those are being filled.
"It's worth the effort or it will be the same old hi-jinks," said Mr Lee, whose post was accompanied by a photo of Martin Luther King Jr, on the US holiday honoring the slain civil rights leader. Idris Elba, was also one of those who were overlooked for Oscar 2016 nominations apart from actors like Will Smith for the sports drama Concussion and Michael B Jordan for the Rocky sequel Creed. Mr Elba earned rave reviews for his role as an African warlord in Beasts of No Nation.
The director of critically acclaimed Straight Outta Compton, a biopic about the rap group N.W.A, was also snubbed.
Mr Smith's wife, Jada Pinkett Smith, said in a video message on Facebook that she would not attend the Oscars, out of principle.

We must stand in our power.

The Academy also came in for heavy criticism over the lack of diversity among the Oscar 2015 winners.