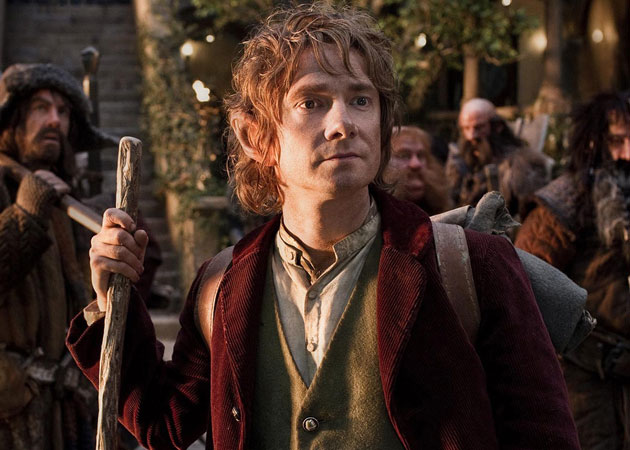 The director announced the final take of the movie via Facebook

Director Peter Jackson invited his fans to the final shooting of The Hobbit: There And Back Again by uploading pictures of the final scene with actor Martin Freeman.

Director Peter Jackson invited his fans to the final shooting of The Hobbit: There And Back Again by uploading pictures of the final scene with actor Martin Freeman.
"Smiles and happiness... And sadness. Yikes, very sad," is how Jackson, 51, summed up his journey of shooting three back-to-back movies, based on JRR Tolkien's fantasy books, a world he first entered through the hugely successful The Lord Of The Rings trilogy.
Freeman plays the protagonist Bilbo Baggins in The Hobbit series, a prequel to The Lord Of The Rings and follows Baggins' adventure as he tries to help a group of dwarves to reclaim their wealth from the dragon Smaug.
"The last shot. Big monitors, main unit. Small screens bottom right, splinter. We're neck and neck... Shooting our final shots at the same time. 10.32 pm. 4 or 5 takes so far. No, wait ... Done! While I was typing this, we shot more takes and finished! Richard was fantastic. Splinter almost done. Minutes away," Jackson wrote on his Facebook page.
In the final picture, Jackson snuggled to his pet cat Mr Smudge.
"A long day. A great day. Thank you all for being part of it! Now for some sleep!".
Initially, Jackson was involved in the project as a producer only with director Guillermo del Toro attached to direct.
The financial trouble at MGM delayed the film, forcing Del Toro to opt out of the project in May 2010 after about two years of working with Jackson and his production team.
Jackson produced the three films -- The Hobbit: An Unexpected Journey, The Desolation of Smaug and There and Back Again.
The Desolation of Smaug will hit the screens this December while the third film is slated to release next year.