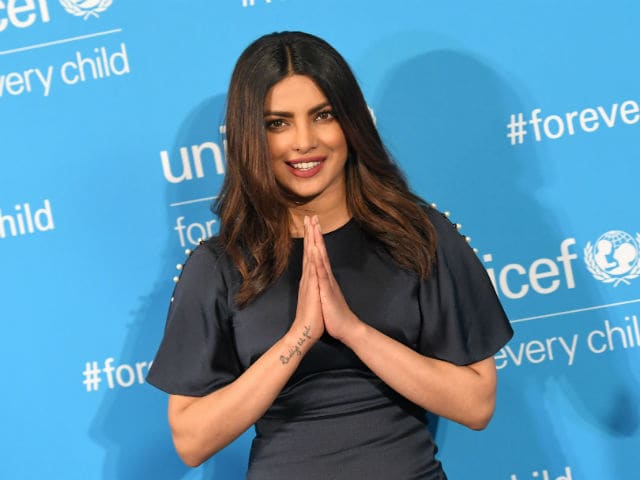 Actress Priyanka Chopra, pride and joy of her home country, was named UNICEF Goodwill Ambassador in a celebrity-studded ceremony in New York yesterday. Priyanka, 34, was presented with the ambassadorship by football star David Beckham, himself a Goodwill Ambassador since 2005. His co-ambassadors Jackie Chan and Orlando Bloom were also present at what was also a celebration to mark UNICEF's 70th anniversary. In her speech, Priyanka spoke about exploitation of children and the need to protect them from inequality and injustice. Priyanka Chopra, who has been involved with UNICEF for 10 years now, was named a National Ambassador in 2010.
Priyanka tweeted:


Can't believe it's been 10 years!Honored to now serve as @UNICEF Global Goodwill Ambassador along with this amazing group #ForEveryChildpic.twitter.com/9WRIoIg8sQ


Thank you @davidbeckham and @milliebobby_brown for inducting me into the @UNICEF global family. Always delighted to meet likeminded people who believe that there is humanity left in us after all. And @milliebobby_brown you were a superb host tonight... congratulations on the #GoldenGlobes nod #foreverychild

Dressed in blue Prabal Gurung, Priyanka said, ""My wish for children is freedom. The freedom to think, the freedom to live. I, we, ask you to join us today to become the collective voice of the oppressed children across the world in our fight against the injustices that they have to endure every day."
"Along this decade old journey with UNICEF, I have been on many field trips to villages and centers across India. On those trips, I spent time with numerous young girls and their families and experienced firsthand the transformative power of empowering young girls with opportunities that are rightfully theirs. Together, with my fellow, dedicated ambassadors, I am now proud to stand with UNICEF to help build a world where children's rights are respected and protected," Priyanka said.
"We are seriously endangering our future, which is our children...Let's choose humanity, let's choose to act now, let's choose to fight now and let's choose to ensure a better world for our children, their children and the generations to come," Priyanka said.
It's been an incredibly eventful year for Priyanka Chopra, currently starring on the second season of her American network show Quantico. She received the Padma Shri, appeared in the Bollywood film Jai Gangaajal, won a People's Choice Award, presented at the Oscars and Emmys, made it to the Time list of 100 and also to the Forbes list of 10 highest paid TV actresses, and is now nominated for her second People's Choice Award. Next year, she appears as the villain in the movie version of Baywatch, her Hollywood debut.
(With inputs from PTI)