Priyanka Chopra congratulated her Baywatch co-star Dwayne Johnson saying, "Sexy is as sexy does." He replied: "You already know I love and appreciate you back." Their film releases in May next year 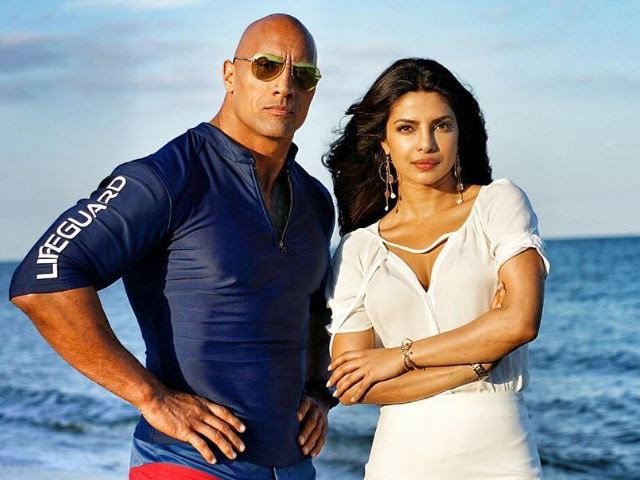 Actor, all round good guy and potential POTUS candidate Dwayne Johnson has been named this year's 'sexiest man alive' by People Magazine and among the first ones to congratulate the wrestler-turned-actor was homegirl Priyanka Chopra, who makes her Hollywood debut in his film Baywatch. Dwayne, 44, stars as Mitch Buchannon, the role played by David Hasselhoff in the iconic Nineties TV series. Priyanka, 34, plays the antagonist, Victoria Leeds. Dwayne Johnson told People that when he heard about his 'sexiest man alive' honour, his first thought was, "That's awesome."
Quite a few others were thinking the same thing. Priyanka Chopra wrote her co-star the nicest message ever on Twitter, to which he sent a prompt response. Dwayne, popularly called The Rock (his moniker from his WWE days), and Priyanka's conversation on Twitter after People's verdict is worth your time:


Congrats @TheRock . Sexy is as sexy does.. One of the nicest people I know.. Much love pic.twitter.com/u2J35NFaHa

Thank you PC! You already know I luv and appreciate you back. Sexy is that "thing" we always talk about. https://t.co/dVB1Nj5CDN

Everyone loves Dwayne Johnson, as Priyanka's tweet suggests. Last seen in the comedy Central Intelligence, The Rock has been hinting at a possible political future and a potential run for the White House. He's a registered Republican and, as per the cover story of People , appears to be campaigning already. Could I make a difference? Could I surround myself with really brilliant people to help me make decisions? Do I care about this country? And when the answers continued to come up yes, then I thought, there's a good chance. Yeah, one day. Then we'll do another interview like this," he said.
Dwayne Johnson stars in Disney's Moana, up for release.
Baywatch, meanwhile, is based on the hugely popular 1990s television series which featured David Hasselhoff and Pamela Anderson in the lead. Both actors will have cameos in the film.
Of her role and character, Victoria Leeds, Priyanka told Interview Magazine: "She is extremely feminine, very evil, extremely delectable, manipulative and patronizing. Victoria is strong because she has minions. She has people to do her dirty work. She doesn't look at how to get results, she just gets them. She doesn't have morality. But also it's a comedy," adding, "It was so much fun to be able to create Victoria in Baywatch. It was awesome to bring that black evilness into their positive, beautiful world."

In a Twitter chat Priyanka said that her character is 'bombshell of a villain' but the actress also revealed that she isn't going to do a slow-mo run on the beach in the iconic red swimsuit. "I'm not a lifeguard, I'm the interruption in their slow motion," she told NDTV in an interview.

The Seth Gordon-directed film also stars Zac Efron, Kelly Rohrbach and Alexandra Daddario and is slated to release in May.
Priyanka Chopra, who has temporarily moved to USA, is busy filming the second season of Quantico, which fetched her a second People's Choice Award nomination this year. Priyanka, who ranked #8 on Forbes' list of the world's highest-paid TV actresses this year, won the award last year.
Priyanka Chopra has no stated plans to return to Bollywood any time soon but Marathi film Ventilator, which she produced, released recently. She's also announced her second film as producer, Punjabi film Sarvann.