Priyanka Chopra got together with the entire cast of Baywatch for the first time to promote her upcoming film at Cinemacon in Las Vegas. She shared pictures and videos from the event on social media 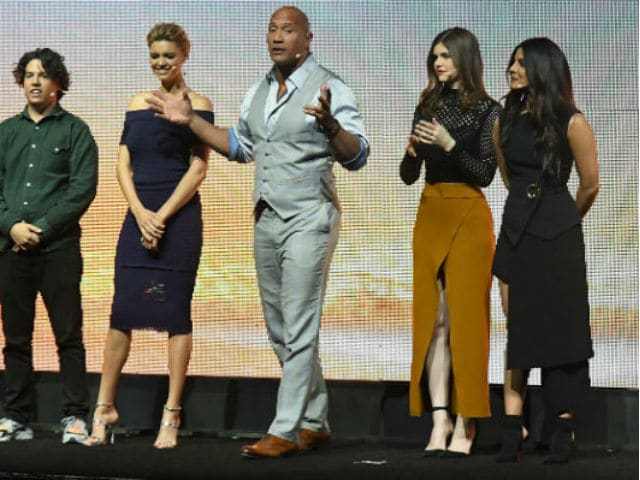 Priyanka Chopra is all set to make her Hollywood debut with Baywatch, directed by Seth Gordon. The 34-year-old actress got together with the entire cast of the movie for the first time to promote her upcoming film at Cinemacon in Las Vegas. Priyanka Chopra, who plays the main antagonist, Victoria Leeds in the film, kept her fans updated by sharing pictures and videos from the event on social media. Priyanka will be seen sharing the screen space with Dwayne 'Rock' Johnson and Zac Efron in the film. Baywatch, which also features Alexandra Daddario, Kelly Rohrbach, Jon Bass, Ilfenesh Hadera, Yahya Abdul-Mateen II, David Hasselhoff and Pamela Anderson, is set to release in theatres on May 26.

Priyanka Chopra also shared glimpse of what was happening backstage. In the 15-second clip, she can be seen singing Britney Spear's nineties hit 'I'm Not That Innocent along with her co-stars Alexandra and Kelly.

In the pictures shared by her, the Dil Dhadakne Do actress can be seen having too much fun with her co-stars Dwayne Johnson and Zac Efron. She captioned one of the pictures as: "Seriously!! No making fun of the bad guy!! @therock @zacefron #bebaywatch #cinemacon2017(sic)."

Priyanka Chopra, who is currently shooting the second season of the American television series Quantico, was recently declared 'Hollywood's Most Bankable Badass' by American magazine Marie Claire. See the picture below:


Introducing our April cover star, @priyankachopra! She was already a huge film star in India when she took on spy thriller @abcquantico. With next month's @Baywatchmovie, she's set to conquer America, too. Read highlights from her interview with Kimberly Cutter when you click the link in our bio. Photograph by Tesh.

Priyanka Chopra won her second consecutive People's Choice Award for portraying the role of Alex Parrish, CIA recruit-turned-FBI agent in Quantico.
She is now quite a regular on international red carpets and talk shows such as - The Ellen Show, The Tonight Show With Jimmy Fallon, Jimmy Kimmel Live and The Late Show with Stephen Colbert. She was also spotted this year at the Oscars and Golden Globes.