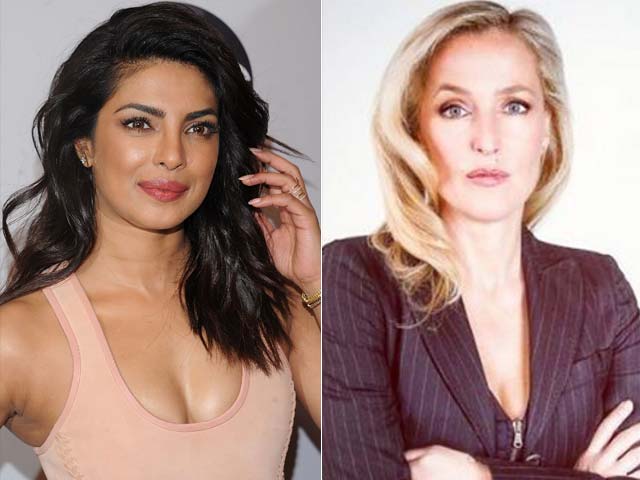 Image on the right was posted on Instagram by _gilliananderson.

As much as I am all for the idea that women should have equal shots at playing characters who have traditionally been played by men for no particularly good reason, and as loath as I am to agree with someone who defaults to canards that lazy in his writing, I fear I have to side with Oleksinski on this one

As happens periodically, a number of prominent actresses have recently said that they wouldn't be averse to playing James Bond should the iconic role be gender-flipped and proffered to them. Gillian Anderson approvingly tweeted a fan-made poster of her as the famous British spy. And Quantico star Priyanka Chopra told Complex that she had no interest in playing a Bond Girl, a role that has become as famous but rather more disposable than the spy himself, because "I wanna be Bond."
Anderson's and Chopra's comments are probably as much about a desire for a Bond-like role as they are an expression of a desire to don a Le Smoking tuxedo, strap on a Walther PPK and introduce themselves as Jane Bond. But predictably, their remarks have prompted the usual round of complaints that women can't play James Bond because of tradition, or, as Johnny Oleksinski put it in the New York Post, a Bond movie is "a frivolous action flick, not a gender studies course at Oberlin."
But as much as I am all for the idea that women should have equal shots at playing characters who have traditionally been played by men for no particularly good reason, and as loath as I am to agree with someone who defaults to canards that lazy in his writing, I fear I have to side with Oleksinski on this one. Women should get great spy roles. But they shouldn't play James Bond.
James Bond isn't required to be a man because only a man can carry off a credible action sequence, or only a man can romance a series of beautiful women, or only a man can credibly represent the British Empire, or any such similar nonsense. Women can do all of those things in real life, and we certainly should be permitted to do them on screen.
Instead, James Bond should be played by a man because the character is a study of masculinity in a particular context. Having a woman play the premier spy in the British secret service, a character who uses her sexuality to gain information and advantage without being judged for it, and who goes to great lengths in defence of her country, would be fascinating. A performance like that would challenge assumptions for what men and women can do. But it wouldn't explore the thing that James Bond movies are designed to explore: what's considered desirable and admirable in a man at any given moment.
Casting a black man, like David Oyelowo or Idris Elba, as James Bond would give the Bond franchise a new perspective on the intersection of masculinity, race, sexuality and power, a particularly potent combination given the legacy of British colonialism and Bond's place within it. Casting an Asian man would push back against the ways in which Hollywood has traditionally treated Asians and Asian-Americans as socially awkward, asexual nerds, especially at a moment when rising South Korean cultural influence is offering powerful alternatives to that model. Allowing Daniel Craig's James Bond to show both psychological and physical strain in Skyfall made that one of the most elegiac and thoughtful entries the franchise has offered up in years.
And beyond the question of what James Bond is for, I think it's worth asking serious questions about whether allowing women to occasionally step into roles that have previously been reserved for men is a significant step forward for gender equality in the entertainment industry. As much as it might be a fun change of pace to see the indomitable Anderson or a newcomer to the United States like Chopra in Bond's shoes, she'd be an exception rather than the rule. And it's the rule that matters.
If our goal is for Hollywood to create action-oriented jobs for women that will be available for decades to come, then we need franchises that are built around women. We need roles like Bond's, or Jack Ryan's, or Captain Kirk's that are designed to be occupied by a rotating series of women. Borrowing Bond's tux might be a fun fantasy. But real power means a role we don't have to give back to the men.
(c) 2016, The Washington Post