Priyanka Chopra Has 'Strict' Plans For Hollywood. She Explains 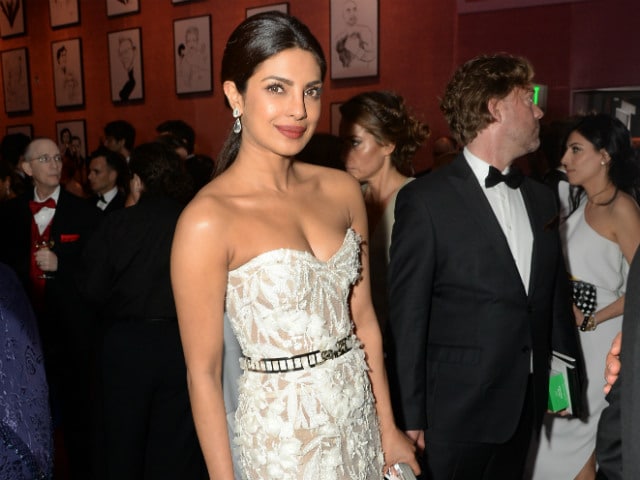 "I am very strict about the fact that I have a certain position in Hindi film industry and that does not get compromised. I will never do that wherever I work in the world. The kind of position I have in Hindi cinema, I want something similar in my Hollywood projects too," said Priyanka

Being one of the leading stars in Bollywood, Priyanka Chopra said that she is careful in choosing her international roles as she does not want to do something that undermines the position she holds in the Hindi film industry.
The actress, 33, became the first female star to land the lead role in American television series Quantico and will now play the main villain in Baywatch. She also made a successful debut on the Oscars red carpet recently where she presented a trophy.
"I am very strict about the fact that I have a certain position in Hindi film industry and that does not get compromised. I will never do that wherever I work in the world. The kind of position I have in Hindi cinema, I want something similar in my Hollywood projects too," Priyanka told PTI in an interview.
The actress said she opted for Quantico, where she plays a young FBI recruit accused of being a terrorist, because ABC offered her an important role.
"Alex is not a wallflower. She is the lead character while in Baywatch, I play the main villain." (Also Read: Presenting Priyanka Chopra From the Sets of Baywatch. Just Wow)
Priyanka said that though she is aware that she already has a dedicated audience, she is happy with her role in Quantico being accepted well in the US.
"When your work gets accepted, you feel really nice. It is very important. I felt really nice when during Halloween many American's dressed like Alex. When I am at the airport, people stop me to ask 'Who is the terrorist? What is going to happen next?' These small things show that the character has been accepted and it resonates with the audience," she said.
The decision to star in Quantico, however, was not an easy one for the actress, who knew that she was walking on a doubled-edged sword.
"I was very nervous when I began because there was no such example for me. I did not know how American or global audience will respond to an Indian actor carrying the show on her shoulders. Indian actors have played important roles in the past in Hollywood but here I was carrying forward the show. I knew that if it does not turn out well, it will be a big mess and I will be made fun off," she said.
Back home, Priyanka was applauded for her performance in Bajirao Mastani though the role was not big. She will be next seen on the big screen this Friday in Prakash Jha's Jai Gangaajal.
Priyanka believes it is a good time to be an actor as entertainment is going global rather than being restricted to one country.
"Quantico screened in 120 territories and was dubbed in 40 languages while Bajirao Mastani released in China. It is a really good time for actors to find their place in the global entertainment world. Actors like Irrfan and Anil Kapoor have already done that. The kind of roles they played, paved the way for people like me to be able to come and do a show or film on their own," she added.
The former Miss World did not have any formal training in acting but credits her long career in Hindi cinema for shaping her into a skilled performer.
"The confidence that I have, I have it from Hindi films. I know my work really well as Hindi films have been a great training ground for me. I am not scared to face the camera. I know what I have to do when I am in front of it. That gives me an edge no matter where I am," said Priyanka.