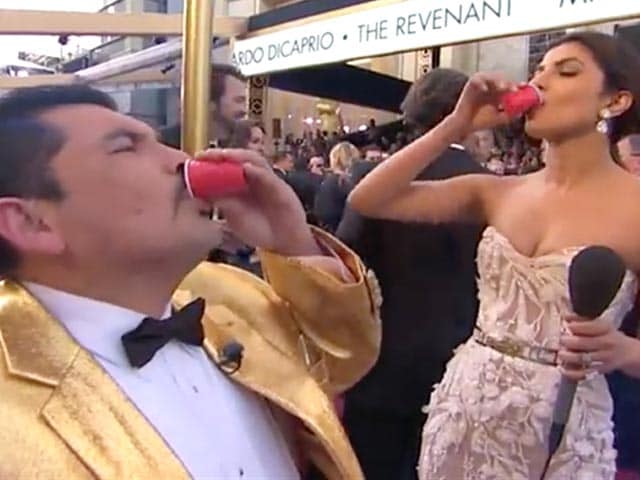 Priyanka and Guillermo in a still from the video

Guillermo from Jimmy Kimmel Live! shared his 'Academy A-water' or Tequila with all the famous celebs who stopped to chat with him. "It's not really water, just some special water," he joked before offering Priyanka a drink. "What kind, Tequila? Just the kind. I need some liquid courage," quips Priyanka in the footage

A bevy of A-listers strutted about on the red carpet at this year's Academy Awards, but the real star of the ball was Guillermo Rodriguez from Jimmy Kimmel Live! who shot to the top of the popularity charts after he shared his 'Academy A-water' or Tequila with all the famous celebs who stopped by to chat with him. (Also Read: Oscars: Priyanka Chopra 'Happy' to be Included With Top Hollywood Actors)
From Sylvester Stallone and Leonardo DiCaprio, to Matt Damon and Charlize Theron, all the stars said cheers to the man in the golden jacket. But the one who seemed really grateful was first-time Oscar presenter Priyanka Chopra who admitted she wanted some "liquid courage" ahead of the show.
In video footage which has been made available online, a jittery Priyanka, 32, is seen joining Guillermo for a quick drink before heading into the prestigious ceremony.
"It's not really water, just some special water," jokes Guillermo before offering Priyanka a drink. "What kind? Tequila?, just the kind. I need some liquid courage," quips Priyanka. "It's really Tequila," she adds after downing the shot.
Other celebs who raised a toast with Guillermo included Charlize Theron, Matt Damon (who he called loser), Kevin Hart, Andy Serkis, , Jacob Tremblay, Bryan Cranston, Sacha Baron Cohen, Whoopi Goldberg, Mark Rylance, Alejandro Gonzalez Inarritu, Dave Grohl, JK Simmons and Jason Sudeikis.
Star Wars actress Daisy Ridley was asked 'how Chewbacca smells.' Charlize Theron gave him a hug and an 'Eskimo kiss.'
Watch video