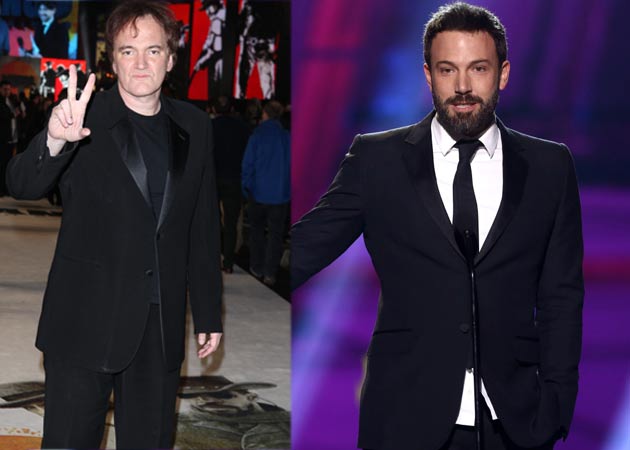 Quentin Tarantino and Ben Affleck missed out on Best Director Oscar nominations even though their respective movies picked up nods in other categories but Quentin thinks Ben's snub was worse than his.

Quentin Tarantino feels sorry for Ben Affleck. Both directors missed out on Best Director Oscar nominations on Thursday even though their movies Django Unchained and Argo picked up nods in other categories but Quentin thinks Ben's snub was worse than his.
Speaking at the Django Unchained premiere at London's Empire, Leicester Square, he told BANG Showbiz: "It would have been nice and everything but at the end of the day, I actually feel more sorry for Ben Affleck. He really deserved it and I think we all thought he was going to get it, so I feel really sorry for him."
While, Quentin is excited that his own movie received five Academy Award nominations, he doesn't believe it will win the night's biggest award, Best Picture.
He said: "It feels very lovely, it's nice to be invited to the party. It's been a good week. Five Oscar nominations today, five BAFTA nominations yesterday. I don't think it will win Best Picture. But if it did, I will take it for sure."
While Christoph Waltz was unexcited about his own nomination for Best Supporting Actor, saying: "I have no idea if I will win. I'm not a bookmaker," the movie's female star Kerry Washington was more enthusiastic.
She said: "It's quite a ride, it's very exciting."
The premiere was also attended by the film's stars Jamie Foxx and Samuel L. Jackson while celebrities including Ashley Roberts, Hugo Taylor, James Arthur and Tyler James also walked the white carpet.