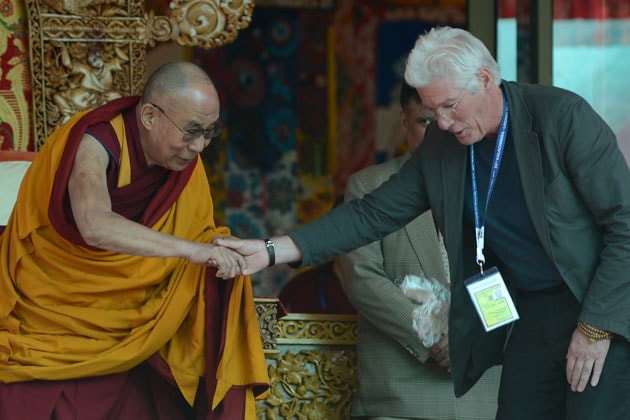 Hollywood actor Richard Gere is in Leh, the main town of the mountainous district of Ladakh in Jammu and Kashmir, to attend to Tibetan spiritual leader the Dalai Lama's discourses.

Hollywood actor Richard Gere is in Leh, the main town of the mountainous district of Ladakh in Jammu and Kashmir, to attend to Tibetan spiritual leader the Dalai Lama's discourses, event organisers said on Monday. He will also participate in the highly venerated Kalachakra (Wheel of Time) ceremony for world peace that will continue till July 14. (Also Read: Padma Lakshmi dating Richard Gere, reports US media)
"Richard Gere is here to get the teachings of His Holiness (the Dalai Lama) and to participate in the Kalachakra ceremony," an official of the Ladakh Buddhist Association, one of the organisers of the event, told IANS.
Till July 8, the spiritual leader will give discourses. The Kalachakra ritual dance will be performed by Namgyal Monastery monks on July 9 and the Dalai Lama will confer the Kalachakra initiation from July 10-12.
After he wished the Dalai Lama on his 79th birthday on Sunday, Mr Gere recalled that directly after his first meeting with him in Dharamsala 33 years ago, he came to Ladakh, which he described as one of the most beautiful places on earth.
He described himself as humbled by the fact that he lived at the same time as His Holiness. Mr Gere said he felt extraordinarily fortunate not only to know him, but also to be able to listen to him.
On behalf of the more than 4,000 other foreigners in the audience, Mr Gere wished the Dalai Lama a happy birthday, said a post on the official website of the Dalai Lama.
Tenzin Taklha, joint secretary at the Dalai Lama's office, told IANS that Mr Gere would attend all ceremonies in Leh till July 14.
It is after a gap of 38 years that the Dalai Lama is holding the Kalachakra ceremony in Leh.
The last Kalachakra ceremony was held in Bodh Gaya in Bihar in January 2012.
Officials from the Dalai Lama's office said this would be the 33rd occasion on which the Dalai Lama conferred his teachings on disciples since May 1954 at the Norbulingka Palace in Lhasa, Tibet.
"We are expecting over 150,000 devotees to participate in the Kalachakra ceremony," Ladakh Buddhist Association general secretary Sonam Dawa told IANS.
The Dalai Lama has lived in India since fleeing his homeland in 1959. The Tibetan administration-in-exile is based in the northern Indian hill town. Around 140,000 Tibetans now live in exile, over 100,000 of them in different parts of India. Over six million Tibetans live in Tibet.