"Hope your birthday is like a giant kiss on the lips," wrote Chris Evas, which he shared a GIF 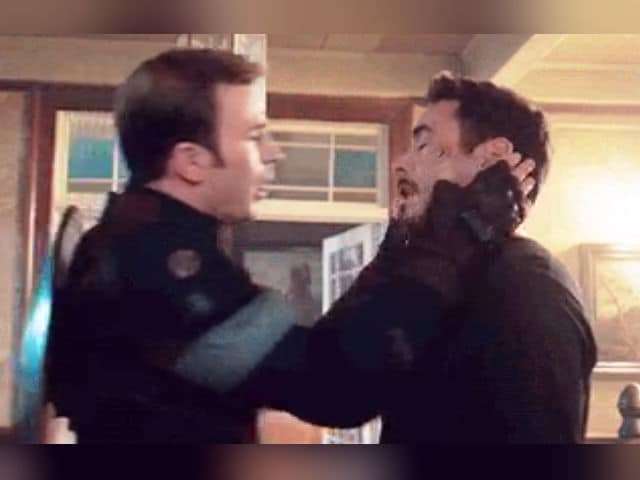 Chris Evans and Robert Downey Jr in a film still.

Actor Robert Downey Jr's reputed to be as smart-mouthed IRL as he is as Tony Stark/Iron Man on screen, so his fellow Avengers seized gleefully on the chance to revenge themselves while posting birthday wishes for the actor, now 52. Chris Evans, who plays Captain America, posted this deceptively worded tweet: "Happy birthday to the legendary @robertdowneyjr. Mento. Life-saver. Friend. Hope your birthday is like a giant kiss on the lips." Which sounds super sweet until you check out the GIF he attached with it (let's not forget how fractious the dynamics between Iron Man and Captain America are in the films):


Happy birthday to the legendary @RobertDowneyJr. Mentor. Life-saver. Friend. Hope your birthday is like a giant kiss on the lips! pic.twitter.com/GK60sd8QLK


Happy birthday @robertdowneyjr you haven't aged a day since this picture

Robert Downey Jr's birthday was yesterday - but it's still yesterday in USA today, so happy birthday, Iron Man.
Robert Downey Jr's impressive body of work includes a Oscar-nominated turns as Charlie Chaplin in Chaplin and a white actor pretending to be black in Tropic Thunder, as well as acclaimed performances in films like Zodiac and the two Sherlock Holmes films. But it's as Tony Star/Iron Man that he's now adored the world over and regularly tops the Forbes list of highest-paid stars. RDJ has starred as the billionaire playboy and inventor by day, superhero also by day in three Iron Man films, two Avengers films, the third Captain America film, and will also star in the upcoming reboot Spider-Man: Homecoming, playing mentor to the young Peter Parker. He will also reprise the role in Avengers: Infinity War next year and has signed on for the new Doctor Dolittle film.