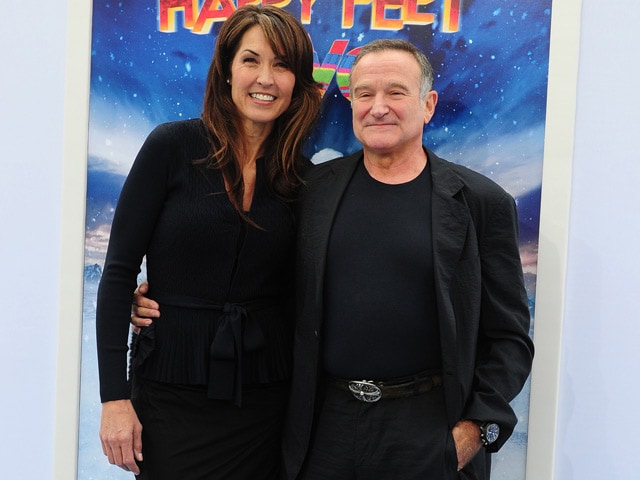 In this file photo, Robin Williams is seen with his wife, Susan Schneider, at an event in California. (Image courtesy: AFP)

The dispute centers on objects related to the actor's career, his childhood and objects from his office

Robin Williams' widow and his three children have agreed to out-of-court negotiations in a battle over parts of the late actor's estate - including movie awards such as his 1998 Oscar for Good Will Hunting.
A judge in San Francisco delayed until June a hearing on a suit filed in December by Susan Schneider, with whom the comedian and movie star had been married for five years when he committed suicide in August of last year at the age of 63.
Ms Schneider's attorney, James Wagstaffe, told AFP that over the next two weeks he would meet with Mr Williams' three children from two previous marriages - Zelda, Zachary and Cody Williams - to try to reach an agreement. (Also Read: Robin Williams' Widow and Children Tangle Over Estate)
If this fails a mediator will intervene, he said.
The deadline is June, when the battle could reach court and become public.
The dispute centers on objects related to the actor's career, his childhood and objects from his office, except the furniture that was in the house he shared with his now widow.
The movie awards that Mr Williams won, such as his Oscar, would be worth a lot of money to his children, the attorney said.
Ms Schneider said in her lawsuit that the executors of the fund that the actor created to manage his estate insisted, days after his death, on having access to his home to share out and take possession of some objects.
The widow says all she wants is the suit Mr Williams wore in the ceremony in which he married her and their wedding gifts.
Zelda Williams rejected reports on social media on March 30 that she and her siblings had already removed objects from the home of their late father.