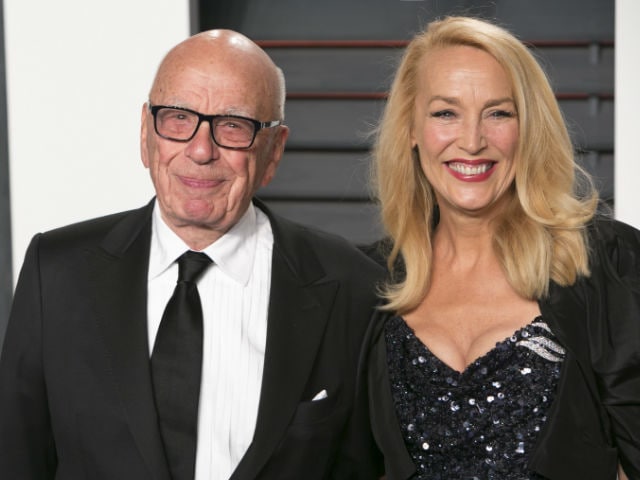 Rupert Murdoch married Jerry Hall in a civil ceremony at Spencer House, an elegant 18th-century mansion in London's exclusive St James's district which was built for an ancestor of the late Diana, princess of Wales. It is the fourth marriage for 84-year-old Murdoch and technically the first for Jerry Hall

Rupert Murdoch married model Jerry Hall in London Friday less than two months after they got engaged, prompting the media mogul to describe himself as the "luckiest" man in the world.
It is the fourth marriage for 84-year-old Murdoch and technically the first for Jerry, 59, although she had a long-term relationship and four children with Rolling Stones frontman Mick Jagger. (Also Read: How Jerry Hall Went From Life With Mick Jagger To Rupert Murdoch)
The couple got married in a civil ceremony at Spencer House, an elegant 18th-century mansion in London's exclusive St James's district which was built for an ancestor of the late Diana, princess of Wales.
Mr Murdoch wore a blue suit while Hall sported a pale trenchcoat and flat shoes as the couple smiled for photographers following the ceremony.
Mr Murdoch tweeted shortly afterwards:

No more tweets for ten days or ever! Feel like the luckiest AND happiest man in world.

The couple, who have 10 children between them, are expected to hold a ceremony of celebration on Saturday at St Bride's Church on London's Fleet Street, where celebrity guests will reportedly include actor Michael Caine and London Mayor Boris Johnson.
While no major national newspapers are based there any more, Fleet Street is the historic heart of Britain's press and St Bride's calls itself "the spiritual home of the media".
With an estimated fortune of more than $11 billion, Mr Murdoch owns some of the world's most famous newspapers including The Wall Street Journal, The New York Post and British tabloid The Sun.
His third marriage to Wendi Deng ended in 2013 amid media reports that she had developed a crush on Britain's former Prime Minister Tony Blair, who denied any impropriety.
Jerry had a Hindu wedding ceremony with Mick Jagger in 1990 in Bali, although a court ruled the ceremony was not legally binding when they split up nine years later.
Australian-born Murdoch, who is a US citizen, and Texan Hall were first pictured together in October at the Rugby World Cup final in London.
They are thought to have started dating shortly beforehand after being introduced by one of Mr Murdoch's sisters and his niece in Australia when she was performing in a theatre production of The Graduate.
The couple announced their engagement in the births, marriages and deaths section of The Times newspaper, which Mr Murdoch owns, on January 12.
"Mr Rupert Murdoch, father of Prudence, Elisabeth, Lachlan, James, Grace and Chloe Murdoch, and Miss Jerry Hall, mother of Elizabeth, James, Georgia and Gabriel Jagger, are delighted to announce their engagement," the announcement read.