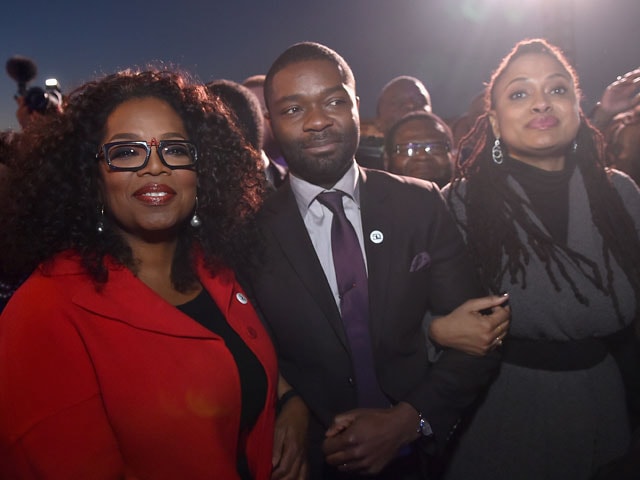 Oprah, the film's director Ava DuVernay, its cast-members David Oyelowo and Common, and the producers behind the movie joined local residents in the city of Selma for a massive march

Oprah Winfrey and the team behind the film Selma took their star power to Alabama to honour Martin Luther King Jr.

Oprah, the film's director Ava DuVernay, its cast-members David Oyelowo and Common, and the producers behind the movie joined local residents in the city of Selma for a massive march.

Local television station WSFA tweeted a photo as the gathering got underway.

Such a joy, a privilege, an honor to be in the city of Selma today with my parents, my siblings my #SelmaFilm family. Onward! #SelmaisNow

The hours-long event, ahead of Martin Luther King Day, started with an interaction with the cast and filmmakers at Selma High School.

The critically-acclaimed drama focuses on the 1965 Selma-to-Montgomery marches demanding voting rights for blacks. Some of the marches were led by the iconic civil rights leader, played in the movie by David Oyelowo.

The march came after the Oscar nominations which saw the film receive nods for best picture and best original song. However, Oyelowo and DuVernay did not receive Oscar nods, raising eyebrows among critics of the Academy, including director Spike Lee.

The movie, which was once considered a top contender in the awards season, has had a rough run recently, and controversy surrounding the film may have hurt its chances with Oscar voters.

Historians put the filmmakers on the defensive after questions about its accuracy surfaced regarding the relationship between Martin Luther King and President Lyndon B Johnson.

Despite the controversy, President Obama screened the film at the White House on Friday and was joined by the cast and crew.