Sharmila Tagore served as the chairperson of the Central Board of Film Certification (CBFC) from 2004 to 2011. In 2005 Ms Tagore was chosen as an UNICEF Goodwill Ambassador 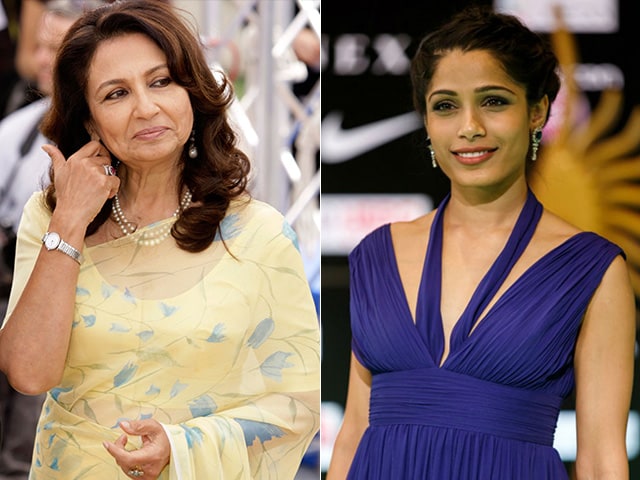 Veteran actress Sharmila Tagore, Freida Pinto and director Deepa Mehta feature among Indian-origin film personalities invited by the Academy of Motion Picture Arts and Sciences to be a part of its new class of members.
The Academy invited a record 683 new members -- 46 per cent female and 41 per cent persons of colour -- as it aims to diversify following criticism of its largely white and male membership.
Apart from Ms Tagore, Ms Pinto and Ms Mehta, British filmmaker of Indian origin Asif Kapadia -- who won the Best Documentary Feature Oscar for Amy, based on the life of singer Amy Winehouse -- also features in this year's class of new members.
Sharmila Tagore served as the chairperson of the Central Board of Film Certification (CBFC) from 2004-2011. In 2005 Ms Tagore was chosen as an UNICEF Goodwill Ambassador. She was also one of the International Competition's Jury Members at the 2009 Cannes Film Festival.
Freida Pinto rose to prominence through Slumdog Millionaire, which won eight Academy Awards in 2009. She has appeared in several American and British productions, often playing supporting roles. Ms Pinto also appeared in the 2011 science fiction film Rise of the Planet of the Apes.
A noted Indo-Canadian director and screenwriter, Deepa Mehta began her career with Fire in 1996 and later working on her trilogy of the elements: Fire, Earth and Water.
She was born in India and has a degree in philosophy from the University of Delhi. After immigrating to Canada in 1973, she embarked on her professional cinematic career as a scriptwriter for children's films.
She made her debut as a director and producer with Sam & Me in 1991.
The diversity push at the Academy comes in response to the #OscarsSoWhite uproar that took place earlier this year, when all-white acting nominees put a microscope on the Academy's largely white and male membership.
"We are proud to welcome these new members to the Academy, and know they view this as an opportunity and not just an invitation, a mission and not just a membership," Academy president Cheryl Boone Isaacs said in a statement.
Mr Isaacs also encouraged Hollywood and the larger creative community to "open its doors wider, and create opportunities for anyone interested in working in this incredible and storied industry."
The new class is by far the largest ever announced by the Academy -- and it features celebrities aged as young as 24 and as old as 91.
On the Hollywood front, the new members also include Star Wars actor John Boyega, Idris Elba and last year's best actress winner Brie Larson. Also invited are Kate Beckinsale, Creed director Ryan Coogler, Michael B. Jordan and Emma Watson.
(Except for the headline, this story has not been edited by NDTV staff and is published from a syndicated feed.)