The wedding took place at the Viva Las Vegas Chapel in Sin City on Monday. It was officiated by an Elvis Presley impersonator and live-streamed 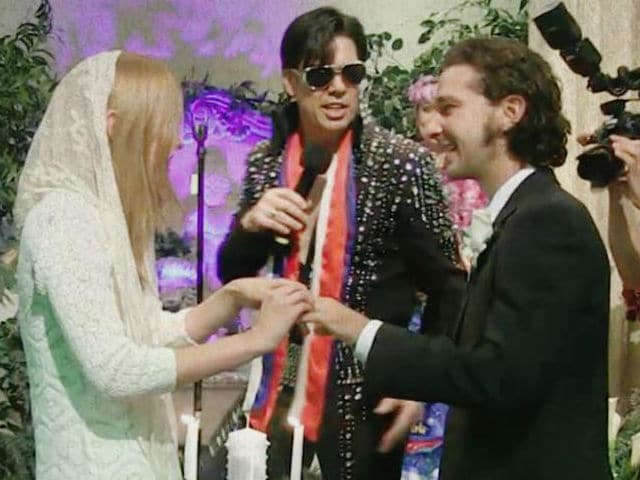 Actor Shia LaBeouf married his longtime girlfriend Mia Goth and they exchanged some unusual vows. The wedding took place at the Viva Las Vegas Chapel in Sin City on Monday. It was officiated by an Elvis Presley impersonator and live-streamed by TMZ.
Mia wore a short crocheted white gown with a veil, while Shia sported a black suit with white button hole. The bride and the groom entered the chapel with a Presley song playing in the background, before they exchanged some unusual vows.
"With this ring; I thee wed; With a prayer; that our love grows stronger; through the passing years. And I'll do whatever you ask me to do," he said.

Mia said: "I give you this ring; as a token and pledge; of our vows to each other; praying that our love; shall never fade. And I'm pretty much going to do whatever I want."
The couple also promised to adopt one another's hounddogs, not to wear their blue sues shoes in the rain, to be "one another's teddy bear."
They shared a kiss before the Presley impersonator burst back into song.
Shia is best known for his roles in films like Surf's Up, Transformers, Indiana Jones and the Kingdom of the Crystal Skull, Wall Street: Money Never Sleeps, Lawless, Nymphomaniac and Fury.
(Except for the headline, this story has not been edited by NDTV staff and is published from a syndicated feed.)