Sonam Kapoor said: "I am excited to welcome Gigi in India, I have always loved Tommy Hilfiger" 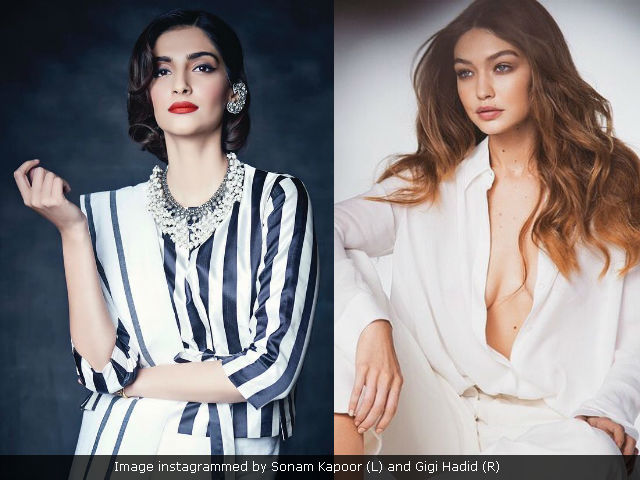 Actress Sonam Kapoor is all set to meet model Gigi Hadid, who is currently on a tour to promote her fashion label - TommyXGigi. The 21-year-old model said in a statement: "Travelling around the world to meet fans and present the TommyXGigi collections has been an amazing experience. I look forward to visiting Mumbai and celebrating our final #TogetherTour stop this season," reports news agency PTI. Gigi will be in Mumbai on April 27 to discuss fashion and her role of Tommy Hilfiger womenswear global brand ambassador with Sonam Kapoor, reports PTI. Sonam, who co-owns fashion label Rheson with her sister Rhea Kapoor, said: "I am excited to welcome Gigi in India, I have always loved Tommy Hilfiger, and the TommyXGigi collaborative collection is just pure perfection."
Sonam Kapoor has carved a niche for herself in the fashion circuit in India and abroad. She is a regular at the Cannes Film Festival, where she represents a cosmetics giant. Sonam's presence on the red carpet is much awaited and is scrutinized by fashion critics worldwide. Last year, Sonam was the unofficial brand ambassador of Ralph & Russo, having opted for their couture for all her red carpet appearances. At home, the National Award-winning actress is way ahead in the fashion game when compared to her colleagues.
Meanwhile, Gigi Hadid has already promoted her clothing range in Los Angeles, Amsterdam, London, Milan and Paris, reported PTI. Gigi Hadid has been the face of brand Tommy Hilfiger for the longest time. In an earlier interview to Page Six, designer Tommy Hilfiger praised Gigi's style and panache. He said, "I am proud to have her as the face of my brand and proud to have her collaborate with me. There's no other girl like her in the entire fashion world - not only because of her beauty, but because of her style."
(With PTI inputs)