Star Wars' Carrie Fisher Is In A Galaxy Far, Far Away. Celebs Mourn On Twitter

Carrie Fisher died following a cardiac arrest on Tuesday. Her Star Wars family and fans remembered her on Twitter 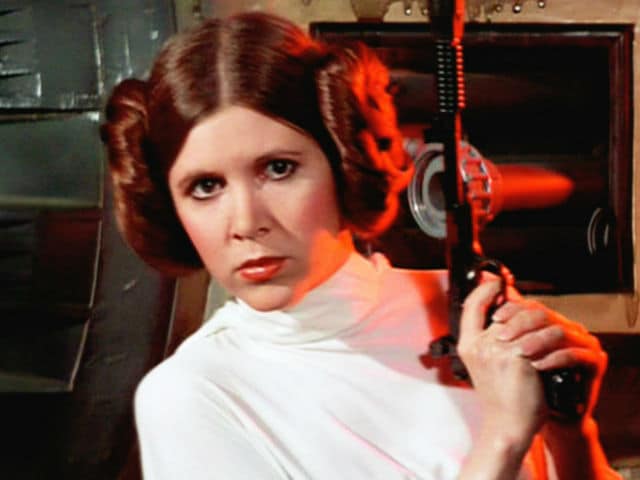 Hollywood actress Carrie Fisher, who became famous as the rebel warrior Princess Leia of the original Star Wars trilogy, died on December 27. She was in hospital after suffering a cardiac arrest last week. She was 60. Ms Fisher's co-stars and friends added their voices to a torrent of tributes from Hollywood for the Star Wars actress. Ms Fisher's mother Debbie Reynolds released a statement in which she thanked the fans of the Princess Leia and said: "Thank you to everyone who has embraced the gifts and talents of my beloved and amazing daughter. I am grateful for your thoughts and prayers that are now guiding her to her next stop," reported news agency AFP.
Ms Fisher's Star Wars family is shocked and sad, like the rest of us.
Carrie Fisher was all of 19 when she featured in the first Star Wars film - Star Wars: Episode IV - A New Hope - opposite actor Harrison Ford. The late actress only recently revealed the she had an affair with her co-star while they were filming the George Lucas-film. Mr Ford in a statement described her as "emotionally fearless" and said: "Carrie was one-of-a-kind - brilliant, original. Funny and emotionally fearless. She lived her life bravely... We will all miss her," reported AFP.
Ms Fisher's co-star Mark Hamill, known for his portrayal of Luke Skywalker tweeted:


I'm deeply saddened at the news of Carrie's passing. She was a dear friend, whom I greatly respected and admired. The force is dark today!


The Force will never be the same pic.twitter.com/4G7OzU2zTr

David Prowse, the actor in the Darth Vader suit (James Earl Jones provided Vader's voice), said in a statement: "I am extremely sad to learn of Carrie's passing. She was wonderful to work with. Condolences to her friends, family & fans around the world," reported AFP.
Star Wars creator George Lucas said in a statement: "In Star Wars she was our great and powerful princess - feisty, wise and full of hope in a role that was more difficult than most people think... she will be missed by all," reported AFP.
Peter Mayhew, who played Wookiee warrior Chewbacca, said he'll miss her dearly:


There are no words for this loss. Carrie was the brightest light in every room she entered. I will miss her dearly. pic.twitter.com/GgIeYGeMt9


I thought I had got what I wanted under the tree. I didn't. In spite of so many thoughts and prayers from so many. I am very, very sad.

Celebrities beyond the realm of Star Wars also paid tributes to the actor.
AFP reported veteran director and producer Steven Spielberg said: "I have always stood in awe of Carrie. Her observations always made me laugh and gasp at the same time. She didn't need The Force. She was a force of nature, of loyalty and of friendship. I will miss her very much."

#CarrieFisher was so witty and provocative and unrelentingly interesting. Goddamn, I loved her. Everyone did.

We lost an icon, gifted actress and tireless mental health advocate. RIP #CarrieFisher! May the force be with you. pic.twitter.com/TJiex0F7D7


I'm deeply saddened to learn of the death of Carrie Fisher. I will miss our banterings. A wonderful talent & light has been extinguished.

Actress and comedian Whoopi Goldberg, who co-starred with Carrie Fisher in Soapdish:


Carrie Fisher has passed, she was funnier&smarter than anyone had the right to be. Sail On Silver Girl. Condolences Debbie & Billie
R.I.P.

Ellen DeGeneres shared a memory with Ms Fisher and wrote:


.@CarriefFisher was a brilliant writer, actor, and friend. She was so much fun. I can't believe she's gone. https://t.co/wpxGvBWA0b

We just lost a great ally for mental health and addiction. Be strong, be as strong as she'd want you to be. Rest in paradise @carrieffisherpic.twitter.com/vxDJkVag06

I'm deeply saddened to learn of the death of Carrie Fisher. I will miss our banterings. A wonderful talent & light has been extinguished.

Carrie Fisher was smart, funny, talented, surprising, and always a hell of a fun time to be around. Family Guy will miss her immensely.

Bob Iger, who heads Walt Disney, the current producers of Star Wars series, told Deadline: "Millions fell in love with her as the indomitable Princess Leia; she will always have a special place in the hearts of Star Wars fans as well as all of us who were lucky enough to know her personally."
Carrie Fisher featured as Princess Leia Organa in the original trilogy - Star Wars later renamed to A New Hope, The Empire Strikes Back and Return of the Jedi. She reprised her role - with a minor change, now she was General Leia Organa - in 2015's Star Wars: The Force Awakens. The shooting for an upcoming Episode VIII is still not completed and is scheduled for release in 2017.
Ms Fisher's other film credits include Woody Allen's Hannah and Her Sisters, Appointment with Death and When Harry Met Sally. She also starred in television movies like These Old Broads and TV series like The Big Bang Theory, Entourage, Sex and the City and Weeds. Her latest work commitment was Amazon series Catastrophe, in which she played Mia, the heinous mother of her co-star Rob Delaney.
(With AFP inputs)