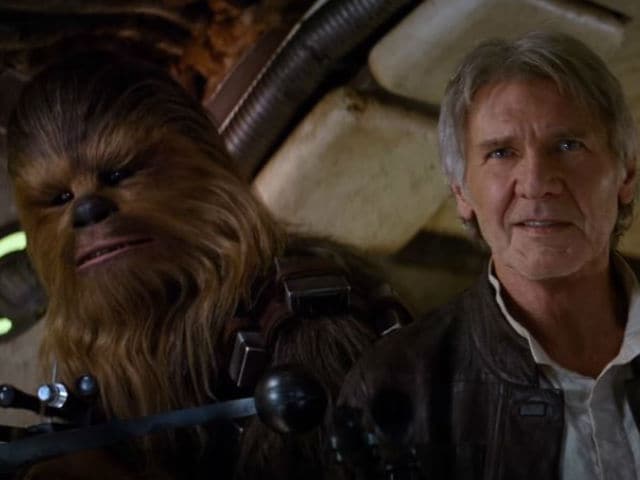 Twelve days after it first hit screens, Star Wars: The Force Awakens has posted an estimated $1 billion sales in global box office. In doing so, the J J Abrams-directed film has become the fastest movie to pass the milestone. The previous record was held by Jurassic World, >, which took 13 days to cross the mark

The new Star Wars film has become the fastest movie to pass the $1 billion mark in global box office sales, Disney said Sunday, as fans of the space epic pack theaters around the world.
Twelve days after it first hit screens, Star Wars: The Force Awakens has posted an estimated $545 million in ticket sales in North America and $546 million internationally, a statement said.
The previous record was held by Jurassic World, which took 13 days to reach the milestone.
The highly anticipated seventh installment of the blockbuster series has received mostly glowing reviews, and is being credited with breathing new life into the juggernaut Hollywood franchise launched by creator George Lucas in 1977. (Read Review: Star Wars: The Force Awakens Delivers the Thrills, With a Touch of Humanity)
In North America, Disney said Star Wars: The Force Awakens is already the second biggest grossing movie of 2015 and the number five of all time, posting record Christmas Day box office sales of $49.3 million.
Over the three-day Christmas holiday weekend, it topped the North American box office, snapping up $153.5 million in estimated ticket sales, which analysts at the Rentrak research company said was the biggest second weekend of all time.
That beats Jurassic World, which garnered $106.6 million in its second weekend back in June, it said.
"The Force Awakens" picks up the intergalactic story of good versus evil 30 years on from "The Return of the Jedi," the last episode of the original trilogy. (Also Read: Scenes From Star Wars: The Force Awakens Were Deleted. Here's Why)
The trio of heroes who appeared in the first of the blockbusters - smuggler Han Solo (Harrison Ford), Princess Leia (Carrie Fisher), leader of the rebel alliance, and her twin brother Luke Skywalker (Mark Hamill) - are all back and played by the actors that Star Wars first made famous.
China Holds the Key
International results exclude China, where the film premiered on Sunday but will only open to the public on January 9, according to Disney.
"Star Wars: The Force Awakens posted an estimated $133.3 million in its second weekend of overseas release from all territories worldwide except China representing approximately 75 percent of the international marketplace," it said.
Jeff Bock, of industry tracker Exhibitor Relations, said "The Force Awakens is likely to dethrone James Cameron's Avatar as the top-grossing film of all time in North America.
But whether it will surpass that movie's $2.8 billion global box office sales record will depend on China, he added.
"Two billion is very doable, but $2.8 billion is a different beast entirely," Mr Bock told AFP by email. "As the number two film market in the world that record will most certainly depend on how The Force Awakens performs there."
Disney highlighted the performance of The Force Awakens in a number of other overseas markets, including the United Kingdom, where it said estimated cumulative ticket sales have so far reached $97.2 million in 10 days.
Australia was the stand-out in the Asia-Pacific region, it said, with the film earning an estimated $35.7 million to date, making it the number two Disney release of all time in the country, just behind The Avengers.
The skyrocketing success of the latest Star Wars has stoked US film industry hopes that struggling theaters can thrive in the face of a growing shift to online video streaming.
Box office revenues were down five percent to $10.4 billion last year while increasing barely one percent globally, according to statistics from the Motion Picture Association of America.
But analysts say powerhouse attractions such as The Force Awakens -- coupled with upgraded theater features such as immersive sound, improved sight lines, and even dinner and drinks - can help win back straying movie buffs.