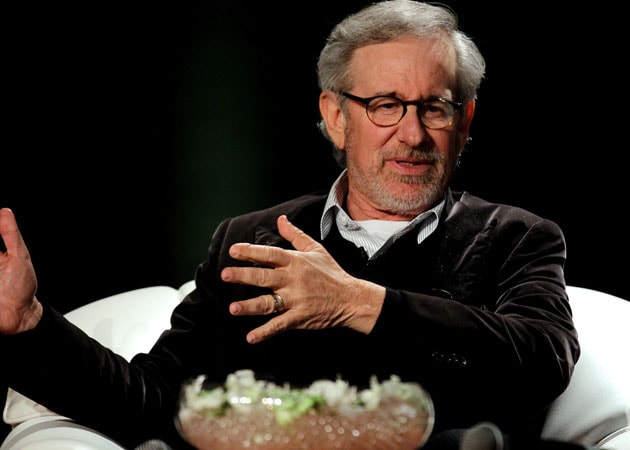 Steven Spielberg is in India to celebrate the success of Lincoln that was co-produced by his company DreamWorks and Anil Ambani's Reliance Entertainment. Image courtesy: AFP

It isn't every day that Steven Spielberg comes to town - the last time he was here was 30 years ago. And it certainly isn't every day that Steven Spielberg says he wants to remake a Hollywood film with an Indian director and scriptwriter.
In conversation with Shekhar Gupta on NDTV's Walk The Talk, Mr Spielberg said: "The experiment I'd like to conduct someday is to take an American movie and remake that film in India. Take that same story and remake that story with an Indian director and an Indian screenwriter to make the necessary adaptation."
Do you see India being able to challenge the star system, asked Shekhar Gupta. Mr Spielberg, who has made movies with big stars and with no stars, said: "I have found that the most important star is the story you are telling. Not who you put in the story, but the story you are telling. There are some notable exceptions. I had a great story about Abraham Lincoln but that film would never have been made if it hadn't been for the great performance of Daniel Day-Lewis."
Mr Spielberg, veteran of movies like E.T the Extra-Terrestrial that star children, also said: "I have got 7 children at home. I direct children on screen professionally and my own children direct me at home personally. If my children see a movie of mine and they don't like it, they tell me immediately. And they never speak about that particular ever again. My children are very honest with me."
Steven Spielberg is in India to celebrate the success of Lincoln, the Civil War biopic that won two Oscars and was co-produced by his company DreamWorks and Anil Ambani's Reliance Entertainment. But that isn't his only India connect. In 1977, he filmed parts of Close Encounters of the Third Kind in India. In 1984, he directed Indiana Jones And The Temple Of Doom, the second film in his adventure series starring Harrison Ford as an intrepid archeologist. The film, which dealt with the cult of goddess Kai and co-starred Indian actors Amrish Puri and Roshan Seth, did not go down well in India because of its depiction of Hinduism and Indian cuisine, which included the eating of monkey brains. Mr Spielberg had to shoot most of the film in Sri Lanka after being denied permission to shoot in India, and the Censor Board temporarily banned the film when it released.
That doesn't seem to have dampened Mr Spielberg's enthusiasm for India. He said: "I basically found this country to be so free, so spiritually free." 30 years ago, Steven Spielberg backpacked through India, visiting "Benaras, Jaipur, Calcutta."
This year's itinerary has a single destination - Mumbai, where Mr Spielberg received a more than warm welcome when he touched down on March 11. First on his agenda was an interaction with 60 directors from Bollywood, moderated by superstar Amitabh Bachchan, at Mumbai's Taj Land's End hotel.
Steven Spielberg has won the Best Director Oscar twice, for Schindler's List and Saving Private Ryan, and was also nominated this year for Lincoln, losing to Ang Lee who was nominated for Life Of Pi.