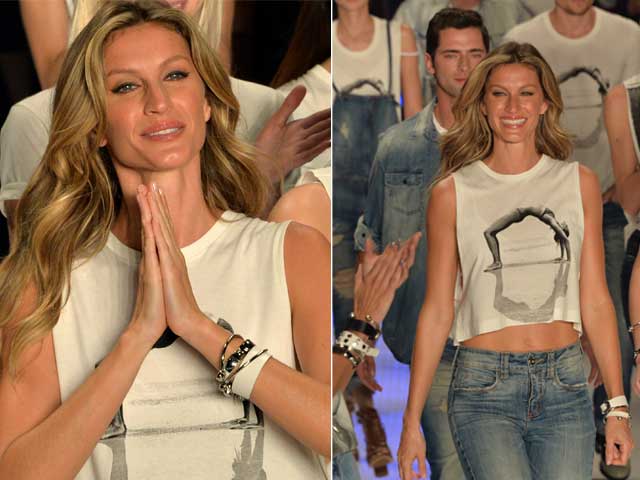 Gisele appeared calm and smiled. But when a crowd of men and women models strode out in jeans and white T-shirts with her image on them, she stayed composed for a bit before bursting into tears

There were tears, hugs, and a standing ovation as supermodel Gisele Bundchen strode the catwalk one last time on her home turf in Brazil on Wednesday.

Gisele, the world's top-earning model, made her final sashay down the runway at Sao Paulo Fashion Week (SPFW), the same event where she made her debut 20 years ago.

She opened and closed the show for Brazilian label Colcci, bringing full circle a runway career that launched her to stardom.

In the first row were family and friends she invited including her parents and American football star husband Tom Brady.

But when a crowd of men and women models strode out in jeans and white T-shirts with her image on them, she stayed composed for a bit before bursting into tears. She hugged friends and waved to well-wishers.

The Brazilian bombshell announced last month she was retiring from runway modeling, saying she wanted to spend more time with husband, New England Patriots quarterback Brady, and their two children, Benjamin and Vivian.

She also told Brazilian newspaper Folha de Sao Paulo, "My body tells me if what I do is worth it, and it asked to stop. I respect my body, it's a privilege to be able to stop."

She will continue modeling off the runway and promoting her lingerie line, Gisele Bundchen Intimates, launched in 2011 for the Brazilian label Hope.

Her final runway show was a symbolic return to her roots.

Gisele and SPFW were both just starting out two decades ago when she had her first show there, taking the runway for local label Zoomp when she was just 14-years-old. Today, the twice-yearly event, which opened on Monday, is the largest fashion show in Latin America.

It was also the start of big things for Gisele, who went on to model for major fashion houses such as Alexander Wang, Balenciaga, Carolina Herrera, Chanel, Louis Vuitton, Valentino, Versace and Victoria's Secret.

"I am grateful that at 14, I was given the opportunity to start this journey. Today after 20 years in the industry, it is a privilege to be doing my last fashion show by choice and yet still be working in other facets of the business," she wrote on Facebook, posting a picture of her teenage self. According to Forbes magazine, Gisele has been the highest-paid model in the world for the past eight years, with $47 million in earnings last year.

Only recently, she signed her largest contract - worth more than $25 million, according to Forbes - with USA sports apparel firm Under Armour.

"It's marvelous she's leaving the runway at a moment when she's at the height of her power. It's an intelligent decision," said Dilson Stein, the talent scout who discovered Gisele in 1994 during a modeling workshop in the small city of Horizontina, in her native state of Rio Grande do Sul.

Gisele began her career when the so-called "heroin chic" of pale, angular models like Kate Moss were the prevailing aesthetic in high fashion.

By 1999, she became the face of Vogue magazine, which splashed her across its cover, calling it "the return of the sexy model."

Dilson Stein remembered being wowed by the willowy girl of German descent, with her long blonde hair, sun-kissed skin and athletic build. "I saw something in her. I knew she would be the great model of the future," he told AFP.