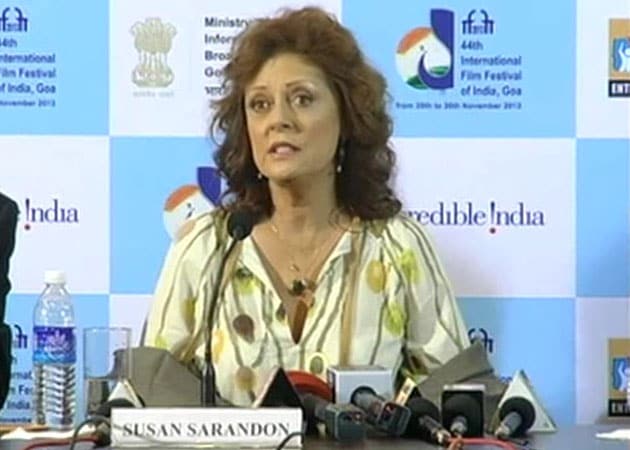 Susan Sarandon won the Oscar for Best Actress in 1995 for her role in Dead Man Walking.

Academy Award winning Hollywood star Susan Sarandon feels it is far more difficult to win an Oscar these days because the procedure is as elaborate as running for President.

Academy Award winning Hollywood star Susan Sarandon feels it is far more difficult to win an Oscar Nowadays because the procedure is as elaborate as running for President.
Sarandon, 67, was nominated four times for the Academy Awards before finally bagging the honour in 1995 for Dead Man Walking.
The actress said winning the trophy now has more to do with who is backing you rather than actual talent. "Getting an Academy Award is great. You kind of join an elite club. But at the same time there are so many actors in the film business. Now you need to have someone like Harvey Weinstein behind you to get an Academy Award or even a nomination. People are on the road doing all kinds of different events, visiting different places. It is like running for President. They spend so much time and money. So there are so many great performances that don't have a shot at all," said Sarandon on the sidelines of the India International Film Festival (IFFI).
The actress-turned-activist also expressed her delight on meeting veteran Indian actress Waheeda Rehman who was honoured with the Centenary award at the festival.
"I told Waheeda that it was wonderful to meet an older actress who has been in the film business for so long and is still cheerful, happy and glowing," she said.
Sarandon, who has been in Hollywood for more than two decades, said working in the film business is very difficult for actresses as they have to struggle for their existence every single day. The business is very cruel to women. People have often asked me whether being involved in politics has cost me jobs in Hollywood. The truth of the matter is Hollywood is not political and the only reason why you can lose work is if you grow old and fat. I think there is something to be said for that," Sarandon said.
The Step Mom star said that even at 67, she feels she has many more years to give to films. "That's the reason so many actresses are telling their own stories. I will try and keep working till I am not having fun anymore. And if I don't get plastic surgery, I will be one of the few actors who looks her age. It is a hard place for women but there are so many actresses who are doing better work as they grow older. I am 67, I can hardly believe myself. "My daughter just wrote something for me and her to do. My son is a director and my other son is a musician. I think we should just start a family cottage film business. That's how I will keep working."
The actress also cleared the air about the designer, who created her bright pink and red knee length dress for the opening ceremony of IFFI.
Earlier, festival director Shankar Mohan had told reporters that Goan designer Wendell Rodricks would design Sarandon's outfit for the opening ceremony but Wendell denied this. "To put all confusion to rest, I would like to say that my dress was designed by my friend and designer Han Feng. She is a Chinese woman, who is now an American citizen. She designed the costumes for Madama Butterfly - The Metropolitan Opera.
"She has also designed clothes for the film Karate Kid. I really wanted to wear a sari for the ceremony but things did not work out with some designers. Hopefully next time I will get to wear a traditional Indian dress," she said.