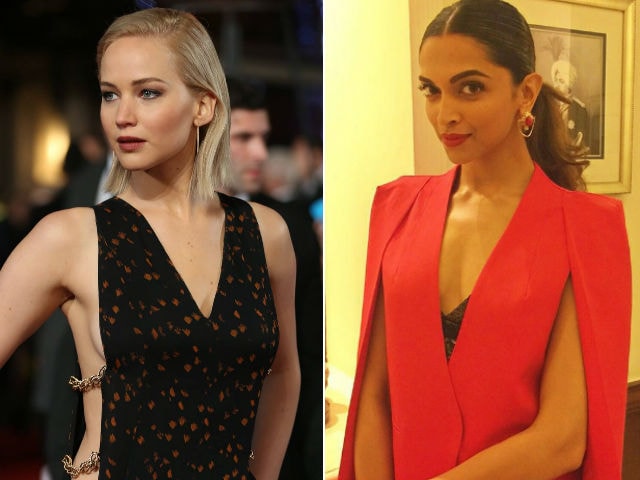 Lawrence made less than the top five highest paid actors. In addition to Johnson, there's Jackie Chan ($61 million), Matt Damon ($55 million), Tom Cruise ($53 million) and Johnny Depp ($48 million). If Lawrence were a man, she would have come in just ahead of Ben Affleck, who earned $43 million.

It's a rich and powerful group: The world's 10 highest paid actresses earned a combined $205 million over the last year, according to Forbes annual list of actress's earnings.
But these women collectively earned less than half than their male counterparts. The combined earnings of the 10 highest paid actors totalled $456.5 million, as detailed in a list released by Forbes on Thursday.
Yes, even the super-rich and famous experience a wage gap.
Forbes tracked earnings before taxes and fees between June 1, 2015, and June 1, 2016. Jennifer Lawrence pulled in $46 million, making her once again the world's highest paid actress. Dwayne Johnson earned $64.5 million, making him the highest paid actor for the first time.
Lawrence made less than the top five highest paid actors. In addition to Johnson, there's Jackie Chan ($61 million), Matt Damon ($55 million), Tom Cruise ($53 million) and Johnny Depp ($48 million). If Lawrence were a man, she would have come in just ahead of Ben Affleck, who earned $43 million.
Lawrence's earnings have been part of the conversation about the Hollywood pay gap before. The 2014 Sony e-mail hack revealed that the actress, along with Amy Adams, was paid less than their male co-stars for the movie American Hustle.
Ninety percent of the women on the 2016 Forbes list supplemented their pay from acting gigs with major endorsement deals, according to Forbes. For instance, Jennifer Aniston, who came in fourth at $21 million, made most of her money through endorsements from companies such as Emirates Airlines, Smartwater, Aveeno and Living Proof, according to Forbes.
Melissa McCarthy earned $33 million and the No. 2 spot on the Forbes list. She received an estimated eight-figure fee for Ghostbusters and designs her own clothing line. She was followed by Scarlett Johansson at $25 million (who was reportedly paid $17.5 million for next year's Ghost in the Shell). Also included: China's Fan Bingbing (No. 5 at $17 million) and Bollywood's Deepika Padukone (No. 10 at $10 million).
These actresses, as a group, are also younger than the top-earning men.
All of the top 10 actors are over 40 years old. Half of the women who made the highest paid actress list are under 40; all of them are under 50.
(Nearly half of the top 20 highest paid actors are over 50, according to Forbes. Just Chris Pratt, who ranked 16th and made $26 million, is under 40.)
Johnson topped this year's list, thanks in part to upfront fees from Central Intelligence, Fast 8 and the forthcoming Baywatch movie, according to Forbes. Chan made his money from movies in China. And Damon's earnings came from The Martian, Jason Bourne and forthcoming The Great Wall.
The Hollywood pay gap became a hot topic last year when Patricia Arquette turned her Oscar acceptance speech into a call for wage equity for women.
"To every woman who gave birth, to every taxpayer and citizen of this nation, we have fought for everybody else's equal rights," she said. "It is our time to have wage equality once and for all, and equal rights for women in the United States of America."
After the Sony hack, Lawrence wrote publicly about negotiating for deals and being "over trying to find the 'adorable' way to state my opinion and still be likable." And Bradley Cooper, who also starred in American Hustle, said he was shocked to find out what Adams was paid for the film.
"She worked every day on that movie and got paid nothing," Cooper told Reuters. "It's really horrible actually, it's almost embarrassing."
Forbes has pointed to how other actresses, such as Meryl Streep and Gwyneth Paltrow, have been paid less than the men in their movies.
But there's another factor that may be causing the gap: fewer acting roles for women than for men, which means fewer opportunities for women to earn more.
For instance, 21 of the top 100 films in 2014 had a female lead or co-lead, according to a University of Southern California study. Just 28.1 percent of all speaking roles were women.
--- Here's the full Forbes 2016 list of highest paid actresses:
Jennifer Lawrence ($46 million)
Melissa McCarthy ($33 million)
Scarlett Johansson ($25 million)
Jennifer Aniston ($21 million)
Fan Bingbing ($17 million)
Charlize Theron ($16.5 million)
Amy Adams ($13.5 million)
Julia Roberts ($12 million)
Mila Kunis ($11 million)
Deepika Padukone ($10 million)
--- Here's the full Forbes 2016 list of highest paid actors: Dwayne Johnson ($64.5)
Jackie Chan ($61)
Tom Cruise ($53 million)
Matt Damon ($55 million)
Johnny Depp $48 million)
Ben Affleck ($43 million)
Vin Diesel ($35 million)
Shah Rukh Khan ($33 million)
Robert Downey Jr ($33 million)
Akshay Kumar ($31 million)
(c) 2016, The Washington Post
(Except for the headline, this story has not been edited by NDTV staff and is published from a syndicated feed.)