The Empire Strikes Back: British raj over American superheroes 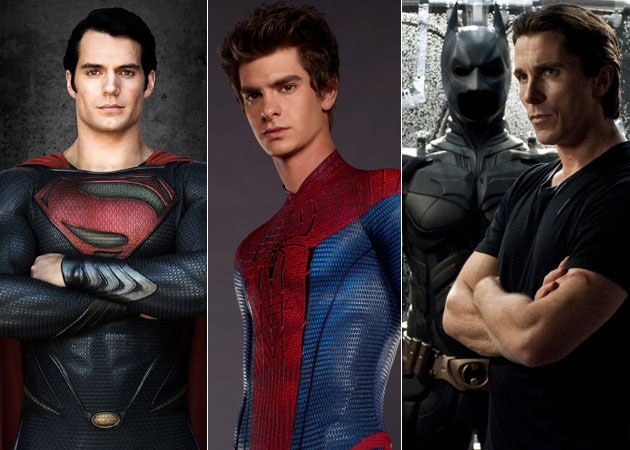 The iconic American superhero is a Brit now. Behind Spider-Man's mask, at the wheel of the Batmobile and now under Superman's cape, a British heart beats - against impressive pectorals.

The iconic American superhero is a Brit now. Behind Spider-Man's mask, at the wheel of the Batmobile and now under Superman's cape, a British heart beats - against impressive pectorals. The current defenders of Metropolis, Gotham and New York came from across the Atlantic, not even stopping for tea and crumpets on the way.
While English actor Henry Cavill is soaring high as the new blue-eyed Kryptonian in director Zack Snyder's reboot Man Of Steel that released worldwide on June 14, 2013; the Batman trilogy (2005, 2008 and 2012), helmed by Brit-American filmmaker Christopher Nolan, revamped the caped crusader Gotham Knight's story with Welsh-born actor Christian Bale in the lead.
Nolan, in fact, made superhero movies credible with his own private army of Brit talent both onscreen and in the production unit. It comes as no surprise then that the studio Warner Bros asked him to come on board as the producer for Snyder's version of Superman too.
The web-slinging friendly neighourhood Spidey, on the other hand, saw a reboot last year with Brit-American actor Andrew Garfield in the lead. Born in Los Angeles and raised in Surrey, Garfield enjoys dual citizenship.
Each actor took over from an American or a series of Americans, as the case may be. Superman's cape was originally worn by Christopher Reeve and, less successfully, by Brandon Routh. The previous celluloid Batmans - Michael Keaton (1989 and 1992), Val Kilmer (1995) and George Clooney (1997) - have all been as American as can be. Ditto Tobey Maguire, the Spider-Man that came before.
Any cinema aficionado would take notice that till recent times, Hollywood traditionally acknowledged Brit talent by casting them as villains, in all manner of films - superhero and no-superhero.
Sir Ian McKellen played the villainous Magneto in the X-Men trilogy (2000, 2003 and 2006) and will now reprise his part in the upcoming X-Men: Days of Future Past (2014). Paul Bettany was Silas in The Da Vinci Code (2006) while Alfred Molina played Dr Octopus in Spider-Man 2 (2004) and the evil sorcerer Maxim Horvath in The Sorcerer's Apprentice (2010).
Most recently, Rhys Ifans played The Lizard in The Amazing Spider-Man (2012), Tom Hiddleston portrayed the Norse God of Mischief Loki in Thor (2011) and The Avengers (2012), Benedict Cumberbatch swapped Sherlock for John Harrison/Khan in Star Trek Into Darkness (2013), and Tom Hardy broke Batman's back as the sinister Bane in The Dark Knight Rises (2012).
Possibly, it all began when Terence Stamp as General Zod almost bested Christopher Reeve with a cold sneer in Superman (1978) and Superman II (1980). Since then, Sir Anthony Hopkins has played the cannibalistic Dr Hannibal Lecter in The Silence Of The Lambs (1991), Alan Rickman has played terrorist mastermind Hans Gruber in Die Hard (1988) and Christopher Lee has been condemned to a lifetime of villainy as Count Dracula in a series of films, evil wizard Saruman in The Lord Of The Rings (2001, 2002 and 2003) trilogy, rogue Jedi master Count Dooku in Star Wars: Attack Of The Clones (2002) and the monstrous Jabberwocky in Alice In Wonderland (2010).
Not even Disney could resist, casting Jeremy Irons as the wicked Scar in The Lion King (1994) and George Sanders as Shere Khan in The Jungle Book (1967).
If Cavill and company are to bring change to Hollywood, then the numbers must do the talking for them. Christian Bale scored a box office hat-trick with the Dark Knight trilogy, and Garfield's Spider-Man proved such a blockbuster that three sequels have been announced. And thanks to its initial weekend earnings worldwide, Man Of Steel is now officially the second-best opening of the summer of 2013 after Iron Man 3.
Spidey said, "with great power, comes great responsibility." He could easily say, now, "with great Brit actors, come great superhero movies."