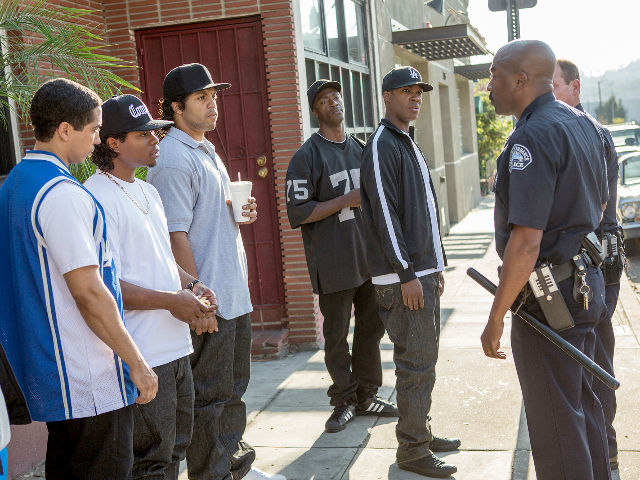 The beauty of the MTV Movie Awards is twofold: 1) They know they have room to have fun, so categories like Best Kiss and Best Virtual Performance allow them to honor parts of movies that aren't life-changing and 2) Their voting process means everyone gets a say, and consequently the awards reflect viewers at large

Straight Outta Compton. Creed. Deadpool. Jurassic World. No, these aren't just the movies that cleaned up at the box office this past year. They are four of the six nominees for Best Picture... at the MTV Movie Awards.
While viewers decried #OscarsSoWhite and lamented the lack of blockbusters up for Academy Awards, MTV appears to have recognized these criticisms and corrected for them with its nominees for the Kevin Hart- and Dwayne Johnson-hosted ceremony on April 10.
The MTV Movie Awards have always been more populist than other ceremonies honoring film, and it showed in this year's nods. Star Wars: The Force Awakens, which went home empty-handed at the Oscars, has 11 chances to win MTV's award, in categories ranging from best fight to ensemble cast to best villain to movie of the year.
The music channel's open-mindedness is especially meaningful this year, though, as the nominees included performers of color who weren't recognized by the Oscars, including Michael B Jordan for Creed for Best Male Performance and John Boyega of Star Wars for both Best Breakthrough Performance and Best Action Performance, for example. (Also Read - MTV Movie Awards: Star Wars to Leonardo DiCaprio, Full List of Nominees)
And the awards didn't stop their innovations there. In an attempt to cater to their core millennial audience, the nominations were announced via Snapchat Discover. And to vote for movie of the year, there's no need to create an account, sign into a website or anything like that -- just simply type "MTV vote" into your Google search and the first result allows you to select your top choice without so much as opening a new tab. (You have until March 20 to vote for this or any of the other categories. While the nominees are selected by MTV producers and executives, winners are decided by the online-voting public.)
MTV also implemented two new categories this year: documentary and true story. The former seems like an effort to be taken seriously, while the latter -- for movies based on real people and events -- is just a good idea in a field permeated with biopics. This way, movies like The Big Short and Steve Jobs aren't in competition with Avengers: Age of Ultron.
There are obviously some crossovers between the Academy Awards and MTV's show, but they treat the industry in very different ways. While Room racked up four Oscar nods (despite being one of the lowest-grossing movies to ever be nominated for Best Picture), the indie drama only has one chance to win the golden popcorn: if Brie Larson wins for breakthrough performance. But in typical confusing MTV fashion, Larson is not a contender in the best female performance category, which houses newcomers like Daisy Ridley (also nominated for Best Breakthrough Performance) and Alicia Vikander.
The beauty of the MTV Movie Awards is twofold: 1) They know they have room to have fun, so categories like Best Kiss, Best Hero and Best Virtual Performance allow them to honor parts of movies that aren't life-changing but inspire Tumblr GIFs worldwide, and 2) Their voting process means everyone gets a say, and consequently the awards reflect viewers at large.
That's why fan-favorite Charlize Theron as Imperator Furiosa in Mad Max: Fury Road, makes an appearance in three categories, and why Straight Outta Compton, which grossed $202 million worldwide, is nominated not only for movie of the year, but for Best Breakthrough Performance for O'Shea Jackson Jr. (aka mini-Ice Cube).
"This show is about fandom and the stars come out to celebrate that," said executive producer Casey Patterson, according to comingsoon.net. "The nominees and the content are naturally diverse and eclectic because we're a true reflection of a real movie-going audience."
And besides, where else do you get to personally choose among Jordan, Chris Pratt (Jurassic World), Ryan Reynolds (Deadpool) and Leonardo DiCaprio (The Revenant) for Best Male Performance? (Though, for what it's worth, our money is on Leo vs. the bear for Best Fight.)
© 2016, The Washington Post
(This story has not been edited by NDTV staff and is auto-generated from a syndicated feed.)