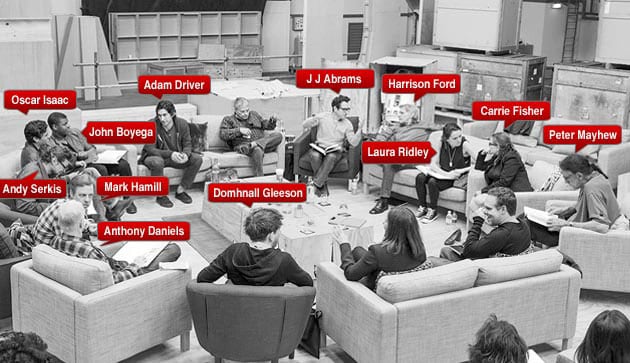 A photo from a cast read-through. Image courtesy Lucasfilm

The cast list of the new Star Wars movie, out next year, has been announced by producers Lucasfilm, sending fanboys and fangirls online into a frenzy.

The cast list of the new Star Wars movie, out next year, has been announced by producers Lucasfilm, sending fanboys and fangirls online into a frenzy.
Shrieks of joy have greeted the return of original Star Wars alumni Harrison Ford, Mark Hamill and Carrie Fisher who played maverick pilot Han Solo, Jedi knight Luke Skywalker and rebel leader Princess Leia. Peter Mayhew, Anthony Daniels and Kenny Baker will also reprise their roles of Wookiee faithful Chewbacca, genteel protocol droid C-3PO and brave mechanic droid R2-D2.
Mark Hamill tweeted just hours ago: Finally I can officially say: I'M IN!!!
The new additions include Max von Sydow, guaranteed to have been cast on the Dark Side. The 80-plus veteran of sinister is famous for playing villains like Blofeld, James Bond's arch-nemesis.
Also joining the cast is Andy Serkis, master of CGI-spiked roles like Gollum from The Lord Of The Rings and Captain Haddock from Tintin.
Oscar Isaac, now a critic's darling after Inside Llewyn Davis, and Domhnall Gleeson, familiar as Bill Weasley from the Harry Potter series, also feature in the new cast.
The more obscure names include John Boyega, Adam Driver from hit TV show Girls, and Daisy Ridley.
Director J J Abrams said: "We are so excited to finally share the cast of Star Wars: Episode VII. It is both thrilling and surreal to watch the beloved original cast and these brilliant new performers come together to bring this world to life, once again. We start shooting in a couple of weeks, and everyone is doing their best to make the fans proud."
Star Wars: Episode VII, set about 30 years after the events of The Return of The Jedi (1983), will begin filming in May and will be mainly shot in a London studio. It releases on December 18, 2015.