The Surprising Reason Hollywood Gets Birds All Wrong 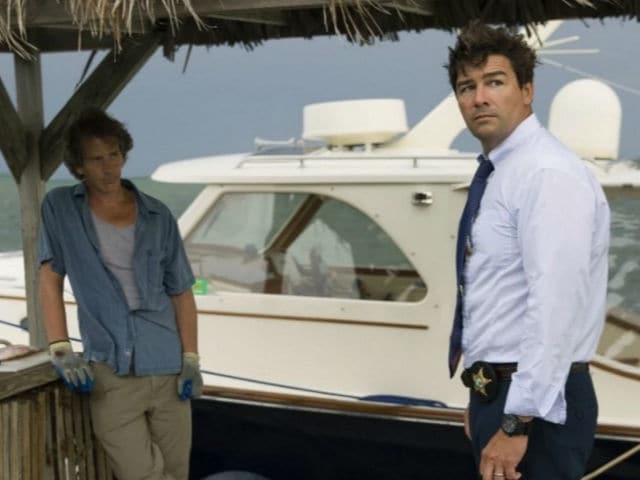 A still from Bloodline, which takes place in Florida but uses the sounds of birds from up north. (Image courtesy: Saeed Adyani/Netflix)

In Hollywood films, the costumes may be historically accurate. The actors' accents might be impeccable. But the birds? The birds will be wrong. The CGI'd raven in this year's Oscars nominee for best picture, The Revenant sure wasn't something native to this country. Birders know not to expect much from Hollywood

Birders know not to expect much from Hollywood. The costumes may be historically accurate. The actors' accents might be impeccable. But the birds? The birds will be wrong.
American bird species are almost never seen in American film or TV. Those vultures seen in the 2013 film The Lone Ranger, set in Texas? They're an African species. The doves in Dances With Wolves? Ringed turtle-doves, also not found in the wild outside of Africa. The CGI'd raven in this year's Oscars nominee for best picture, The Revenant? I don't know what that was, but it sure wasn't something native to this country.
We birders have learned to roll our eyes at the constant inaccuracies, assuming they're the fault of just another producer too lazy to figure out the correct species for the setting.
But filmmakers actually have a good excuse for using exotic birds: Casting native species is against the law.
The Migratory Bird Treaty Act, federal law since 1918, prohibits the possession of migratory birds for commercial purposes, and that includes keeping domestic bird species for use as animal actors.
That's a surprise to many producers, said Benay Karp, owner of Benay's Bird and Animal Rentals in Woodland Hills, Calif. She has supplied Hollywood with birds, dogs, cats, coyotes, reptiles and other creatures for more than 30 years, and she said filmmakers often request native species.
"They'll come in and ask for a blue jay, but we'll tell them we can't use blue jays," Ms Karp said. They might end up with a black-throated magpie-jay, which looks like a blue jay but isn't protected under the Migratory Bird Treaty Act. It's a native of Mexico, a heritage that won it a spot on The Big Bang Theory.
If they want a chickadee, she'll offer a white-cheeked bulbul, a bird native to the Middle East.
It "looks sort of like a chickadee," Ms Karp said.
Ms Karp said she's lost a few jobs because she couldn't supply North American birds. But that's the point of the prohibition, which is a central tenet of the Migratory Bird Treaty Act, said Steve Holmer, a senior policy adviser at the American Bird Conservancy. Before it took effect, some bird populations were almost "decimated" because they were used commercially, he said.
"Snowy egrets were nearly driven to extinction in the early 1900s because their plumes were used to decorate hats, and lots of different game birds were under severe hunting pressure," he said.
When the act was passed in 1918, its proponents trumpeted in Bird-Lore magazine - the predecessor to Audobon magazine - that they were finally relieved of "combating the numberless attempts to legalize the destruction of birds for private gain." Egret numbers rebounded, and many other species benefited. The Migratory Bird Treaty Act has, by all accounts, been a success.
Nearly 100 years later, Hollywood still seems to be abiding by it, said Laury Parramore, a spokeswoman for the U.S. Fish and Wildlife Service, which enforces the act. She said she was unable to recall any enforcement actions it had taken against companies supplying animal actors.
But as a birder, I wonder: Do we lose something by not being able to use native species on-screen? Are we missing out on an opportunity to inform viewers about native birds? What's wrong with using a blue jay when the scene calls for a blue jay?
Ms Karp said she thinks changing the law might actually benefit birds, at least the non-native ones. After all, Hollywood wants to cast live birds, and those birds have to come from somewhere. It would also be cheaper and easier for her to use domestic species; now, she said, instead of getting a hawk native to the Americas, she pays about $4,500 for an exotic raptor from a breeder. Why go to all the trouble of using a Eurasian eagle-owl when a native great horned owl would do?
But overall, Ms Karp said, she supports the law. All of the birds she supplies are "imprints," many generations removed from the wild, and she said she doesn't want to see domestic wild birds captured just so they can have cameos in sitcoms.
"You don't want people out there pulling hawks out of nests," she said.
Neither do bird conservationists.
"If they were to change the law, folks may just go collect species to keep them on hand," Mr Holmer said. "Particularly if you're talking about rare species, extra collecting could be a bad idea."
So, are Hollywood producers and directors off the hook for using foreign birds in scenes that take place in the United States? Not entirely.
The Migratory Bird Treaty Act may prohibit the use of domestic birds as animal actors, but it doesn't police the use of bird sounds. And keen-eared birders know that directors and producers seem to layer bird calls onto scenes with no regard for whether those species would actually be heard in the film's setting.
Greenfinches, grasshopper warblers and other European species sing in South Dakota in The Revenant. Black-capped chickadees aren't found south of Pennsylvania, but they're common residents of Florida's Islamorada on the Netflix drama Bloodline. Listen for the tundra-dwelling willow ptarmigan in the South American jungle during the opening scene of Raiders of the Lost Ark.
Unlike birds appearing on-screen, the misuse of bird calls is pure Hollywood laziness. Unfortunately, there's no law against that.