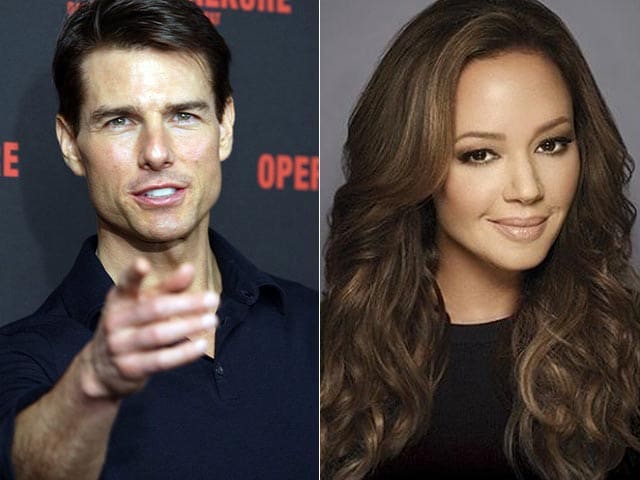 The Mission: Impossible star once wanted to make cookies which allegedly led to a meltdown when he couldn't find the cookie dough. "Tom seemed like a child who had never been told no," Leah writes, adding that Tom yelled at his assistants and then proceeded to demonstrate the positions occupied in the Scientology hierarchy

Actress Leah Remini, King Of Queens star and Church of Scientology escapee, has made a series of damning claims since leaving the organized religion in 2013, many of them featuring #1 celebrity Scientologist Tom Cruise. Her explosive allegations continue in her new book Troublemaker: Surviving Hollywood and Scientology. The Church itself has dismissed her claims, branding them 'revisionist history.' (Also Read: Tom Cruise Wasn't Invited to Daughter's Secret Wedding)
Here are five of the stranger Tom Cruise tales from her book.
The time when Tom Cruise asked Leah to play hide-and-seek with him and Will and Jada:
Leah claims that Tom organized a game of hide-and-seek at his home with his celebrity friends Will Smith and Jada Pinkett. "At first I thought he was joking, but no, he literally wanted to play hide-and-seek with a bunch of grown-ups in what was probably close to a 7,000-square-foot house on almost three full acres of secluded land," she writes in her book. Leah apparently refused to play, blaming her unsuitably shod feet: "I can't play - I'm wearing Jimmy Choos." Tom apparently then tagged her as 'It' and ran off.
The time when Tom Cruise freaked out over cookie dough:
Now 53, the Mission: Impossible star once wanted to make cookies which allegedly led to a meltdown when he couldn't find the cookie dough. His assistants, "terrified of offending Tom," milled around but failed to point out the cookie dough lying on the counter in front of him. "Tom seemed like a child who had never been told no," Leah writes, adding that Tom yelled at his assistants and then proceeded to demonstrate the positions occupied in the Scientology hierarchy. Leah writes: Tom raised his hand above his head. "LRH [L. Ron Hubbard] is here," he said, then lowered his hand to his chin and said, "And Dave and I are here." Then, with his hand down at his waist, he said, "And you are here."
Remember this scene from Knight And Day? It was probably a bit like that.

The time when an actress and Church member was picked to date Tom Cruise for three months:
Nazanin Boniadi, seen in Iron Man and How I Met Your Mother, joined the Church at 17 and is now 35. After Tom Cruise and actress Penelope Cruise broke up, Nazanin was allegedly picked to be the new girlfriend - for three months. She was allegedly made to go through several transformations and to break up with her then boyfriend. "In late 2004, she disappeared," writes Leah who befriended the Iranian-born actress. "I wondered if Naz had gone back to her 'real life.' Years later, I found out what had happened to Naz during this time. She underwent a confidential mission for the church where she thought she was being prepared for a special humanitarian project, but ended up with the role of Tom's girlfriend." It appears that the arranged romance all but destroyed 'Naz.' At the end of the three months, the relationship was ended by Scientology officials who moved the actress to a hotel. She confided in a 'friend' who apparently wrote a nine-page report on her which, Leah claims, led to Nazanin being moved to a cheaper hotel and forced into menial labour for months.
The time when Leah was invited to Tom and Katie's wedding, and it was a nightmare:
In 2006, Tom Cruise married his girlfriend Katie Holmes. They already had a daughter named Suri who was a few months old when they married in November. Leah Remini claims she was invited to the wedding on the condition that she bring along her famous friend Jennifer Lopez and her then-husband Marc Anthony. Scientology officials allegedly tried to separate Jennifer and Leah at the wedding, finally backing off when told by JLo, "she's with us." Katie Holmes apparently kept Tom Cruise waiting at the altar for 20 minutes and at one point, Leah claims she found little Suri Cruise crying on the bathroom floor, watched by three women who included Tom's sister and assistant. I didn't know if they were changing her diaper or what, but the three women were looking at her like they thought she was L. Ron Hubbard incarnate. Rather than talking to her in a soothing voice, they kept saying, "Suri! Suri!" in a tone that sounded like they were telling an adult to get her shit together," Leah writes, adding that she got Suri's bottle, had it reheated and returned it to her which stopped the crying. Leah was then apparently "dismissed" by Tom's sister.
Leah apparently received a series of rebukes for her 'behaviour' at the wedding, with Katie Holmes writing up a 'Knowledge Report' on her - basically a snitching document. Tom and Katie divorced in 2012. Katie recently released a statement apologizing for having 'upset' Leah in the past.
The time when Leah asked Tom's daughter Isabella about her mother, Nicole Kidman
Leah Remini claims she asked Isabella and Connor, the daughter and son Tom adopted with second wife Nicole Kidman, about whether they saw their mother, on the way to the airport after the wedding. "Not if I have a choice. Our mom is a f*****g SP," was Isabella's alleged response. An SP is Scientology shorthand for 'Suppressive Person,' someone who speaks against the Church and who members are forbidden to see or speak to.
Sources: Vulture and Us Magazine