This Actor is so Hated, Someone Was Assaulted Just For Looking Like Him 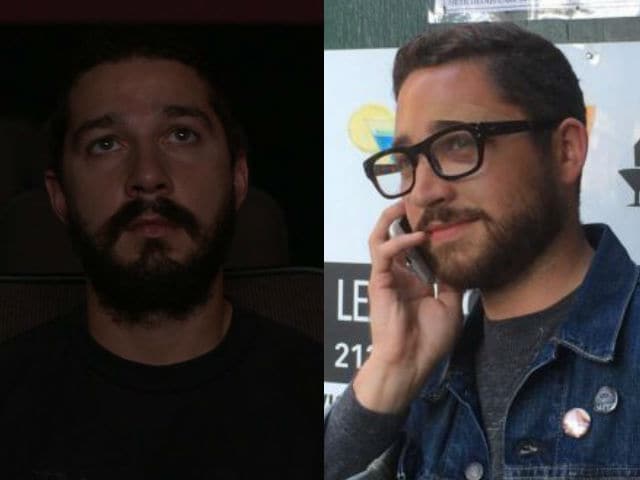 Shia LaBeouf himself reached out to Mario Licato.

Having a famous doppelganger is generally a good thing. If someone tells you that you look like Jackie Kennedy or George Clooney or Idris Elba, a smile's likely to sprout on your face faster than flowers in spring.
Well, that's apparently not the case if you look like Transformers star Shia LaBeouf. Just ask New Yorker Mario Licato.
On Saturday, Licato hopped on the F train, bound for the Lower East Side of Manhattan en route to a show. After reaching his destination, he walked up the stairs only to be greeted by someone's fist. He doesn't remember much of it.
"I didn't even see the guy," he told the Gothamist. "I just see his fist coming towards me. It knocked me, and while I was falling down the stairs, all I hear was, "This is because you look exactly like Shia LaBeouf!"
"I was so confused," he continued. "I was even more confused because I got up and I was like, am I crazy or did I hear him say, 'This is because you look like Shia LaBeouf?' And (the couple) were like, 'Nope. That's exactly what he said as he was running away from you.'"


I wanna thank the guy who randomly decided he needed to hit me last night. "this happened bc you look exactly like Shia labeouf". Well sir you boosted my self esteem bc he's p hot.

The story has spread across the Internet like wildfire. Even LaBeouf himself reached out to the victim, leaving a voice mail after posting on Licato's Instagram page.
Cosmopolitan published what Licato claims LaBeouf said in the voice mail, which he said lasted about two minutes:
"Hey, this is Shia LaBeouf ... I just read an article that you were punched in the face because you look like me? ... Aw, man. That sucks. I'm so sorry. But I get it. It's happened to me before ... I don't know. I wish I was in New York. I'd come bring you soup ... This sucks. I don't even know what to say. I'm sorry. People are just crazy. Just because you look like me? ... Here's my phone number. Don't give it to anybody. Please, please, call me back. Call me back if you want to. We could chat. Let's giggle over this. Maybe there's a silver lining in all this. But call me back. ... And once again, this is Shia LaBeouf, the guy you got hit for looking like. And yeah, man, I'm sorry. I'm just really sorry ... Keep your head up, G."
Many seemed to have no problem with the assault, taking to Twitter to voice their support:


If everyone did this, then someone is bound to punch the real Shia LeBeouf eventually. Just a little collateral damage along the way. Right?

Even looking like Shia LeBeouf is enough of a reason to get your ass kicked.

If you're having a bad day, just remember that in New York today someone got punched just for looking like Shia LeBeouf.

No one seems to have stopped to question the story. It's almost culturally accepted that, yes, someone might be punched for resembling this actor. But why, exactly, do so many people seem to hate Shia LaBeouf? After all, he used to be a fairly beloved childhood star on the Disney Channel, where he played the family's youngest, Louis Stevens, on the family-friendly show Even Stevens from 2000 to 2003. He's the face of the director Michael Bay's Transformers blockbuster series and was in the award-winning Fury alongside Brad Pitt. Still, people seem to despise the 29-year-old actor.
And, rest assured, people DO hate the man. This hate has spawned Reddit threads and YouTube videos too vulgar for the website of a family newspaper even to link out to. In 2014, the Toronto Sun published an article titled "10 reasons we hate Shia LaBeouf." And last year, Star Magazine listed LaBeouf as one of Hollywood's most hated stars.
While it's difficult - and far from scientific - to pinpoint the moment when a star falls from grace, in LaBeouf's case it might be fairly obvious. It likely began with a 2012 film he wrote and directed, titled "HowardCantor.com." Though it had received accolades when it debuted at the 2012 Cannes Film Festival, it didn't quite receive the same praise when it was released online. Instead, commenters began flooding the page to point out that the film's plot and dialogue were similar - extremely similar - to "Justin M. Damiano" a comic written and drawn by Daniel Clowes, Buzzfeed reported.
According to Wired, both the comic and film "open with exactly the same monologue from their eponymous leads."
The comic's publisher, Eric Reynolds of Fantagraphics, told Wired, "When I actually started watching it, I almost spit out my coffee when I realized he lifted the script, word for word."
The film wasn't attributed to the comic, nor was Clowes listed as a collaborator.
"The first I ever heard of the film was this morning when someone sent me a link. I've never spoken to or met Mr. LaBeouf," Clowes told BuzzFeed. "I've never even seen one of his films that I can recall - and I was shocked, to say the least, when I saw that he took the script and even many of the visuals from a very personal story I did six or seven years ago and passed it off as his own work. I actually can't imagine what was going through his mind."
But it got worse for LaBeouf.
With much of the film and comic community enraged, he decided to apologize. But, almost as if as an artistic statement of some sort, he used someone else's apology. According to the A.V. Club, he lifted the apology he tweeted out from a Yahoo! Answers comment forum from four years before. It's not even the first time he's done this - in 2013, he apologized to actor Alec Baldwin, following a dispute, by copy-and-pasting an old Esquire article by Tom Chiarella, A.V. Club reported. It was caught by a New York Times commenter.
From there, LaBeouf's life seemed to become an endless spectacle of artistic statements that left many frustrated.
Following this tweet:

In light of the recent attacks against my artistic integrity, I am retiring from all public life.

He was forcibly removed from a Broadway performance of "Cabaret" in 2014 for allegedly smoking inside the theater and causing a disturbance, The Washington Post reported. He wore a paper bag on his head that read "I Am Not Famous Anymore" to the Berlin Film Festival in 2014, tweeting the same message, according to Variety.
Pop star Sia had to apologize for a music video she released last year, because LaBeouf, wearing only flesh-colored boxer briefs, dances with 12-year-old Maddie Ziegler from Dance Moms, which raised pedophilia concerns, The Post reported.
The ill will toward LaBeouf has turned violent and ugly at times. In 2014, in response to much of the aforementioned, LaBeouf took part in a performance art show at Cohen Gallery in Los Angeles titled "#IAMSORRY." In the show, the actor wore a paper bag on his head with eyes holes cut out. Visitors were allowed to come face-to-face with him. Allegedly, during the show, one woman sexually assaulted LaBeouf. Luke Turner and Sade Ronkko Ronkko, the artists he collaborated with on the project, both issued statements confirming the allegation, The Post reported.
In 2014, actor James Franco wrote an op-ed in the New York Times, titled Why Actors Act Out, which defended LaBeouf. He wrote:
"Mr. LaBeouf has been acting since he was a child, and often an actor's need to tear down the public creation that constrains him occurs during the transition from young man to adult. I think Mr. LaBeouf's project, if it is a project, is a worthy one. I just hope that he is careful not to use up all the good will he has gained as an actor in order to show us that he is an artist."
Of course, LaBeouf is not the first child actor to struggle with infamy - if he is, indeed, struggling.
Miley Cyrus, who also received her big break on the Disney Channel as the titular character in "Hannah Montana," caused a tremendous amount of controversy when she broke from her country roots with a controversial performance at the 2013 VMAs. She's been called racist over and over again. Still, The Post published a story titled "Six ways Miley Cyrus went from VMAs punch line to a social activist pop star" and she remains a force in pop culture.
If nothing else, no one has ever been punched for looking like her, so far as the world knows.