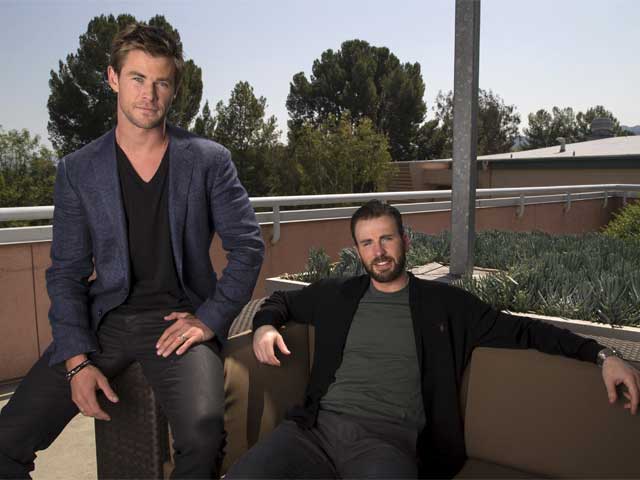 Chris Hemsworth and Chris Evans found themselves unable to keep a straight face while discussing their latest offering Avengers: Age of Ultron

Superheroes Thor and Captain America might be serious about saving the world in Marvel's ensemble Avengers: Age of Ultron, but actors Chris Hemsworth and Chris Evans found themselves unable to keep a straight face while discussing the film.
Amid laughs and irreverence in an interview with Reuters, Chris Hemsworth, the 31-year-old who plays Thor, and Chris Evans, 33, who stars in the role of Captain America, talked about the Marvel franchise and female characters. Here are excerpts.
Ques:The Avengers are looking inwards at their own fears and responsibilities in Age of Ultron. Why was that important?
Chris Hemsworth: They're a little more mature than the first time around. The first time was them trying to come together as a team, and now they're trying to operate as a larger scale, as a team, or have been for some time.
But I think all the worlds that they've been a part of are beginning to collide, and the pieces of the puzzle that they've moved around are coming together and causing this chaotic event.
Ques: There has been a lot of commentary that there needs to be more female representation in these films.
Chris Evans: Who says that? Great, use that. Nailed it. Man, I saved this one.
Chris Hemsworth: I didn't say that, by the way.
Chris Evans: No, I did.
Chris Hemsworth: I agree, there should be more female representation (laughing) Before he (Evans) ruins this interview and my career, what's the question? I'm actually interested, what was the question?
Ques: How does this movie address criticism that there aren't enough female characters in superhero movies?
Chris Hemsworth: (If I) have it my way, I'd get rid of all of us, have an all female cast - women are smarter than men. My mum's smarter, so is my wife, so women (turns to Chris Evans) you should leave this interview and women should lead the world. You sexist human being.
Chris Evans: This interview is my favorite one. This is my favorite one. My favorite.
Chris Hemsworth: I'm with you though, I'm just not sure we've really nailed down the question.
Chris Evans: But they're going to do it though. They're doing "Captain Marvel," people are going nuts over Captain Marvel.
Scarlett (Johansson) was playing Black Widow in Iron Man 2, it wasn't like she had a long-picture deal, but fans wanted it and she keeps coming back. Now we've got (Elizabeth) Olsen and even Cobie (Smulders), they keep bringing Cobie back.
There's no denying that people want to see female superheroes and there's plenty of them, and I think (with) Marvel, these aren't getting old. I think a lot of people think there's superhero exhaustion. I tend to disagree because Marvel can't stop making good movies, and they absolutely will bring more females to the screen. Nailed it.
Ques: You answered two of our questions in one go.
Chris Evans: I don't even have a wife!
© Thomson Reuters 2015