Thor: Ragnarok Trailer - Thor (Minus Hammer And Hair) Vs Hulk. And Loki? 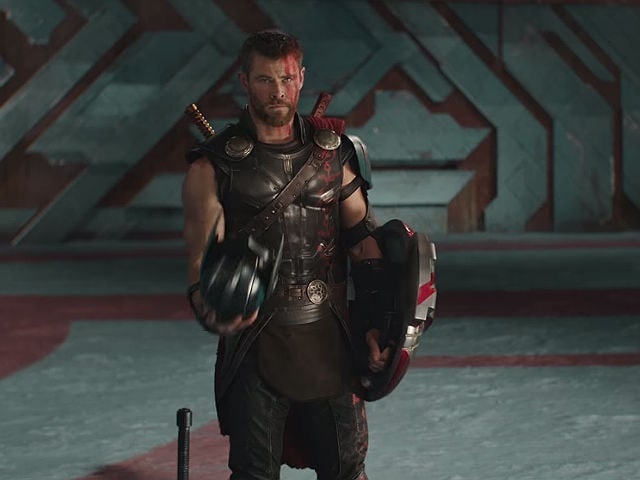 The big draw of Thor: Ragnarok is this titanic showdown. The trailer ends with Thor and the Hulk running toward each other, fists clinched and ready to pulverize

The God of Thunder's salon-quality blonde locks have seen better days.
Marvel Studios has released the first trailer for Thor: Ragnarok, a movie that will see Thor (Chris Hemsworth) go into battle against both friends and foes.
The trailer begins as most Thor trailers do, with Thor swinging his hammer Mjolnir toward evil, only this time, the evil doesn't flinch. Hela (Cate Blanchett) catches Mjolnir with one hand, not only wielding the one object in the Marvel universe that no one else has been able to budge (except for that time Vision handed Mjolnir to Thor in Avengers: Age of Ultron), but also destroying it with that same hand, crushing one of the Marvel universe's greatest weapons, leaving only godlike rubble.
It only goes downhill from there for Thor, who without his trusty hammer can't protect Asgard from Hela's takeover.
"Asgard is dead," Hela says.
Thor, now without a hammer or a home, is captured by Valkyrie (Tessa Thompson), who looks more like a potential foe than possible love interest (remember, no Natalie Portman as Dr. Jane Foster in this Thor flick). Valkyrie offers Thor as a potential gladiator contender to the Grandmaster (Jeff Goldblum) and they toss him into an arena to face the foe everyone (fans and those spectators in the arena) knew was coming. After getting a not very Asgardian haircut, Thor waits for the opening of the gigantic doors that will reveal his opponent, and he does the one thing no one was expecting him to do.
Get happy.
The indestructible Gladiator who was supposed to put the fear of God in Thor has instead brought him great joy. It is the Incredible Hulk. And nothing brings these two joy more than being able to beat up each other - a rivalry that began when they traded punches in the first Avengers movie.
The big draw of Thor: Ragnarok is this titanic showdown. The trailer ends with Thor and the Hulk running toward each other, fists clinched and ready to pulverize. So anticipated is this matchup that in this first trailer, we hear nothing from (although we see them for a second) Loki (Tom Hiddleston) or Heimdall (Idris Elba).
The Thor/Loki good brother/evil brother love-to-hate-each-other relationship has always been the highlight of the Thor movie franchise. While it looks to be taking a slight back seat to the Thor/Hulk showdown, Loki being around assures there will be plenty of brotherly mischief. And Loki's probably got his money on the Hulk. If anyone knows the type of damage the Hulk can do, it's Loki.
Thor: Ragnarok, directed by Taika Waititi, arrives in theaters Nov. 3 and will have two weeks to break the bank at the superhero box office before the Justice League finally arrives on screen.
©2017, The Washington Post
(Except for the headline, this story has not been edited by NDTV staff and is published from a syndicated feed.)